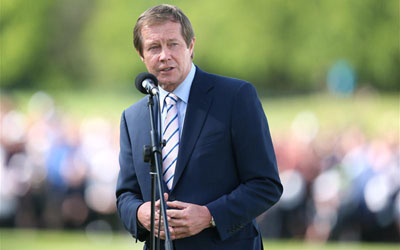 George O’Grady has announced he will step down as the chief executive of golf’s European Tour.

The 65-year-old will remain in charge until a successor is found as the board of directors on the tour begin the search for a replacement.

This will end O’Grady’s 40 year association with The European Tour where he has played an instrumental part in developing the sport, drugs which included the growth of the Ryder Cup, apoplectic securing key TV and sponsorship deals and also helping with the process of golf being reinstated into the Olympic Games.

George O’Grady said: “In the aftermath of what I believe to have been the best presented Ryder Cup since my first involvement in the contest at Royal Lytham in 1977, I felt this was the right time to ask the board to begin the search for my successor.

“It is my firm belief that, coming towards the end of what has been another incredibly successful season, we are now seeing the green shoots of recovery across Europe and I am pleased that this coincides with all our building blocks, in terms of key television and sponsorship contracts, being in place.

“I have agreed with the board to stay not only for the time it takes to appoint a new CEO but also for sufficient additional time after that to see them properly settled in. The board also agreed that, at that stage, I will take up a role as president of International Relations which will see me represent the European Tour through the Olympic Games in 2016.”

“The European Tour and its players are admired throughout the world of golf and George has played a key part in building global relationships and developing the tour. He has always respected the traditions of the Tour and built on the strong foundations put in place by John Jacobs, Neil Coles and Ken Schofield.

“The tour is now embarking on a new phase in its development and that is why George has considered that it is the right time to ask the Nominations Committee to find his successor.”