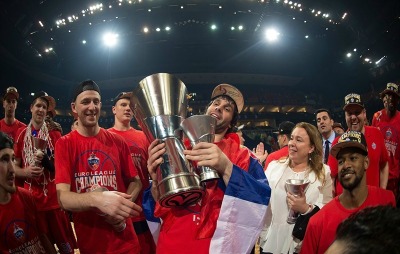 Euroleague put their money on Tempobet

Online sportsbook Tempobet is to feature on courtside advertising during the forthcoming Euroleague Basketball season.

The emerging brand and its sister casino, Tempocasino.com, will be displayed in-game on TV feeds broadcasting the home games of German side Brose Bamberg.

Their six-figure deal, which will feature a minimum of 15 regular season games, is possible thanks to the digital modification of in-stadia billboards that allows companies to connect with local audiences by territory through global sport.

Bamberg start the 2016/17 season with an away fixture against Fenerbahce Istanbul on October 14th, and will host three other teams from Turkey, as well as representatives from countries including Spain, Greece, Russia, Israel, and Serbia.

Tempobetmanaging director Mark Clayton said the deal gave the brand significant exposure in a number of different countries. He added: “I’m delighted to have secured this advertising.

“Basketball is a hugely popular sport with both our existing customers and among potential ones,and the opportunity to be the only sportsbook on the billboards in Germany was too good to miss.

“Having one deal that gives us simultaneous coverage in multiple European territories with audiences of many millions at the same time will help take us to the next level.”