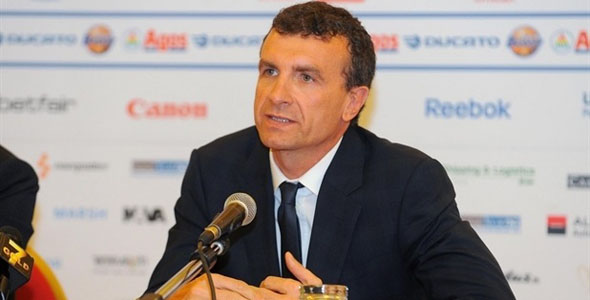 Euroleague Basketball has announced today that EA7 Emporio Armani Milan president Livio Proli is their Executive of the Year for the 2013-14 season.

Mr. Proli was voted as this season’s award recipient by his peers in the Turkish Airlines Euroleague. In five seasons as club president, Mr. Proli has played a central role in EA7 Emporio Armani Milan returning to the forefront of European basketball in terms of results on the basketball floor and commercial growth as evidenced by the club doubling its attendance for Euroleague games last season. Mr. Proli also worked in great cooperation with Euroleague Basketball as the 2014 Turkish Airlines Euroleague took place his team’s home arena, Mediolanum Forum in Milan.

Mr. Proli is an accomplished businessman, who worked for Giorgio Armani as CEO and general manager of the Simint S.p.A in Modena. When Mr. Armani became involved in the Olimpia Milano basketball club with Armani Jeans as its main sponsor in 2004, Mr. Proli became a member of the club’s board. He took over as team president in 2008 and on January 1, 2010 was named general manager of Giorgio Armani S.p.A.

Under Mr. Proli’s leadership, EA7 Milan was awarded a Euroleague A-license and twice represented Euroleague Basketball by hosting exhibitions in the NBA Global Games. Last season EA7 Emporio Armani enjoyed its greatest season in a generation by winning the Italian League for the first time since 1996 and reaching the Euroleague playoffs, too.

Going hand in hand with the team’s on-court success, EA7 Milan made huge strides in arena attendance under Mr. Proli. The club’s investment in ticketing strategies paid off handsomely last season, when attendance at Mediolanum Forum during Euroleague games skyrocketed to 8,804 fans per game, a 150% increase over the previous season. EA7 Milan sold out six of its 15 home games last season and reported a total attendance of 123,255 fans. Its ranking among Euroleague teams for attendance jumped from 23rd to 11th last season.

The Gianluigi Porelli Euroleague Executive of the Year award is one of the competition’s two annual post-season honors along with the Alexander Gomelskiy Coach of the Year Trophy.