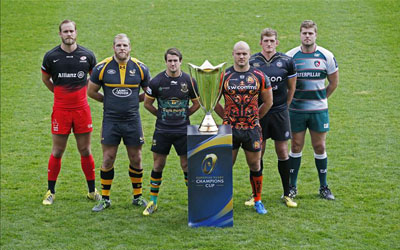 The European Professional Club Rugby (EPCR) has signed a five-year partnership with Tissot to become the Official Watch and Timekeeper of the European Rugby Champions Cup and Challenge Cup.

The deal between the tournament organiser of European professional club rugby and the Swiss watch brand will run until the end of the 2019/20 season.

Tissot will supply timekeeping technology to all stadiums staging Champions Cup and Challenge Cup matches during the coming seasons.

EPCR Director General, Vincent Gaillard, said: “It’s great news that a world-class brand such as Tissot is coming on board as an official supplier to the tournaments. The Champions Cup and Challenge Cup are set to take centre stage once again, and as accurate timekeeping is vital in a sport such as rugby, we are sure that Tissot will play a key role as we continue to grow the club game in Europe.”

François Thiébaud, Chairman of Tissot, said: “We are very proud to be part of European professional club rugby. The European Rugby Champions Cup and Challenge Cup are the perfect platforms to showcase our expertise in a thrilling international environment.”

This is the second deal concluded by EPCR in a matter of days after announcing a partnership with Turkish Airlines.