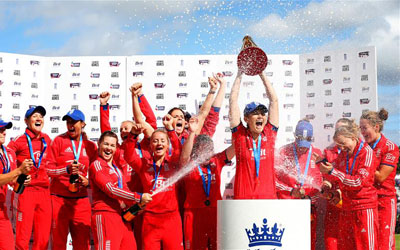 It was revealed today that the English Women’s Cricket team as well as inner city areas have been approved to receive investment funding from the England & Wales Cricket Board (ECB).

The new decision approved by the directors of the ECB Board, will see a portion of increased revenue which the ECB receives from International Cricket Council (ICC) events reinvested into inner city areas as well as into the women’s game.

The new proposal also plans to give the players of the England Women’s Team a major pay rise and bonus following their Ashes success in Australia this winter.

Giles Clarke commented on the new investment and said: “The success of the England women’s team was a real bright spot during an otherwise disappointing winter. Over successive years the women’s team have produced not only excellent results but have also been outstanding role models for a generation of girls and women who have been inspired to take up the game.”

Minister for Sport Helen Grant MP also commented about the new proposal and said: “I share the ECB’s desire to see cricket grow and I welcome this significant financial commitment directed at both the women’s game and at developing facilities in our inner cities. Sport generally, and cricket specifically, appeals to people right across the country and it is excellent news that the ECB are acting to improve access and revive interest in cricket in our urban centres.”

The new plans hope to rescue and create new grounds in urban areas starting with London. This movement was spurred on by the increasing amount of over 14’s who play in cricket teams but have difficulty in accessing grass pitches.

Mr Clarke commented on this and said: “ECB stands to benefit from the new financial arrangements at the ICC and the Board shared my passion for reviving cricket in inner cities in the next 10 years.

“Where there are no facilities we will work with local authorities and the outstanding Chance to Shine project to build grounds. That is the way that we can build proper inner city cricket clubs which will attract thousands of new players to the game.”