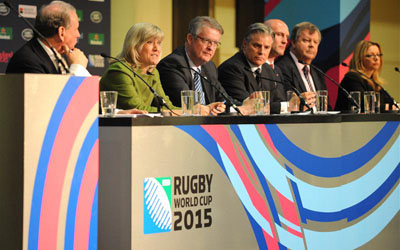 England Rugby, the organisers of the 2015 Rugby World Cup, have announced they sold 950,000 Rugby World Cup 2015 tickets in the September general sale, with record levels of demand for tickets for pool and knock-out stage matches.

Tickets were on general sale from September 12-29, and England Rugby 2015 received applications for more than 5 million tickets, leading to demand exceeding supply at every price category for 23 of the 48 matches.

Ballots were run earlier this week for matches and price points where demand for tickets exceeded supply, and ballots were held for at least one price point in every one of the 48 matches.

Rugby fans will be notified of the results of their ticket applications on Saturday, October 25, and payment will be taken from payment cards from Monday, October 27.

Rugby fans who did not receive tickets in the ballots will receive priority when tickets go back on sale by the end of November.

Demand for tickets was highest for England v Australia, England v Wales, New Zealand v Argentina and Australia v Wales in the pool stages, and for both semi-finals and the Final.

Debbie Jevans, Chief Executive Officer of England Rugby 2015 said: “We are thrilled with demand for tickets a year out from the Tournament, and the record level of demand we saw in September is a terrific indicator of the general interest and excitement for Rugby World Cup 2015.

“Demand has exceeded supply for a high number of our matches, and the only downside of such strong demand is that there will inevitably be some disappointment when rugby fans are notified of the results of their applications on Saturday. We would like to thank everyone who applied for tickets and anyone who missed out on tickets this time will get first priority when the remaining tickets go back on sale next month.”

Bernard Lapasset, IRB Chairman, added: “We are delighted with the incredible demand for tickets across the Tournament from fans in the UK and around the world. Rugby World Cup is all about the fans and the players and today’s announcement reinforces our belief that Rugby World Cup 2015 will be a very special record-breaking celebration of Rugby and the host nation. It really is too big to miss.”

In addition to the 950,000 tickets sold in the September sale, 340,000 tickets were sold by England Rugby 2015 to rugby fans through rugby clubs in England and Wales as part of the Rugby Community Programme, while the overall sales figure will increase through the November sale.