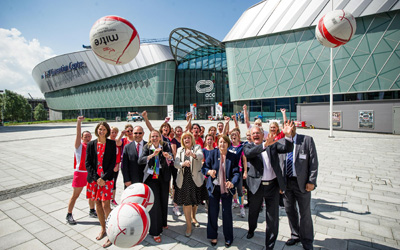 The city of Liverpool in England has been put forward as a candidate to host the Netball World Cup in 2019.

At the heart of the bid is the ACC Liverpool complex, which includes the 8,300 capacity Echo Arena.

The bid also includes the Exhibition Centre for the athlete training venue and the BT Convention Centre which would act as the INF Congress venue.

England Netball Chairman Cheryl Danson OBE said: “Liverpool is an iconic city immersed in sport and, with its global reputation and warm welcome, would be the perfect host to showcase the Netball World Cup 2019 to the world.

“Through ACC Liverpool we are able to offer the INF a wonderful single site venue that includes the competition arena, training venue, INF Congress venue and event hotel.

“All these facilities are interlinked and situated on a World Heritage waterfront site, perfectly located to deliver the most seamless and athlete centred Netball World Cup ever.

“To ensure a lasting impact from the INF’s flagship event, we want to create a step change in knowledge transfer that supports the INF in its ambition to develop the game world-wide.

“Within our bid we have a budget to support emerging nation delegates coming to Liverpool to attend INF Congress, be part of the tournament observer programme and exchange ideas to develop the sport at every level.

“What’s more, our commercial offer to the INF to host the Netball World Cup is strong, all underpinned by the British Government through UK Sport.”

The bid forms part of UK Sport’s Gold Event Series, a programme investing over £40million of National Lottery funding to bring up to 100 of the world’s most prestigious sporting events to the UK by 2023.

Roberto Martinez, Manager of Everton Football Club also offered his support to the Liverpool bid saying: “Sport is the lifeblood of this city and creates passion among its people whatever their team, or activity, or league.

“Whilst the world may be currently tuned into the World Cup, we must remember the importance of all sports in encouraging support and participation both now and as a lasting legacy.

“I have no doubt that Liverpool would do netball proud if the Netball World Cup was held in the city.”