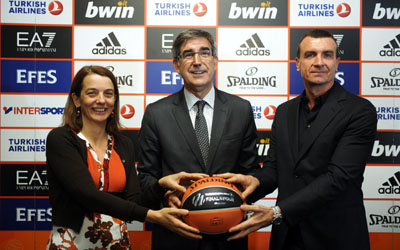 Giorgio Armani S.P.A has announced today a parthership with Euroleague Basketball making EA7 Emporio Armani a 2014 Turkish Airlines Euroleague Final Four partner for the event that takes place on May 16 to 18 in Milan, Italy.

EA7 Emporio Armani, which title sponsors a team in the league, will partner with the Euroleague Final Four to co-organize a number of events on and off the court throughout the weekend, to assure Euroleague fans will enjoy a unique experience at Mediolanum Forum, site of the Final Four games.

At the city’s emblematic Piazza Duomo, site of the Final Four Fan Zone, the Armani Junior Hoops Area will bring excitement by hosting hundreds of children from their grass roots program, which focuses on helping 8- to 13-year-olds from different neighborhoods in Milan. The Armani Junior Program is part of One Team, the corporate responsibility program of Euroleague Basketball.

“Partnering with EA7 Emporio Armani is a natural decision for us, as we cannot think of any other partner with such big importance both in Italy and in the elite fashion world, that has historically supported sports and in particular Italian Basketball,” Jordi Bertomeu, President and CEO of Euroleague Basketball, said. “With this agreement EA7 Emporio Armani’s support to basketball, goes beyond Italian borders into a global event.”

“This is a collaboration that emphasizes, once again , the strong link of Armani ‘s ties with sport and youth, with the city of Milan and the municipality, with which there is an ongoing open and fruitful dialogue,” said Livio Proli, General Manager of Giorgio Armani S.P.A. “At Armani we partner with sport as we share the same values: determination, strength, sacrifice but also friendship, team spirit, elegance. These are the qualities Armani believes in, on and off the court.”

“Milan is globally recognized as the capital of design, the city of fashion, but Milan is much more than that,” Bertomeu said. “It is also a capital of basketball, with a strongly-rooted tradition and really passionate fans. The combination of these two factors inspired Designers United, a multi-award winning firm, to build a powerful brand for one of Europe’s most important sports events, the 2014 Turkish Airlines Euroleague Final Four.”