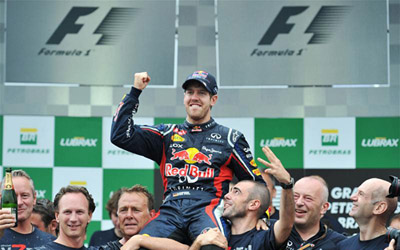 Global airline, decease Emirates has announced a five-year sponsorship deal with Formula One as they ramp up their sports strategy.

The Dubai-based airline’s sponsorship deal includes 15 races this season starting in Malaysia. It will not sponsor the Australian, Monaco, Bahrain or Abu Dhabi Grand Prix, according to F1 supremo Bernie Ecclestone.

“I’m obviously very proud to be associated with Emirates, the sort of brand that should be with us and us with them,” Ecclestone said at a news conference in Dubai. “We like to feel we are associated with the top corporate (brands), which we are obviously are with Emirates. The teams will benefit. It lifts everyone in Formula One.”

Emirates is continually looking to spread its reach globally and is just the latest sponsorship deal involving a major sport. It already is an official partner with FIFA and recently signed a five-year deal with the ATP which begins this year. It also comes days after new five-year shirt sponsorship deal with Paris Saint-Germain, the big-spending French soccer team that signed David Beckham.