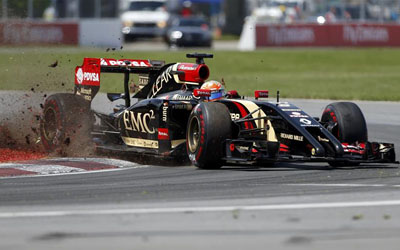 Lotus F1 Team’s technical partner EMC has expanded their relationship with the team, prostate in a deal that sees their branding increased on the team’s E22.

EMC’s logo will feature on the sidepods of the car at the British, Singapore and Abu Dhabi Grands Prix as a part of the new agreement.

Matthew Carter, Lotus F1 Team CEO said: “We are delighted to take our relationship with EMC to another level with this branding agreement for three of the most prestigious Grands Prix of the season.

“We are building a world class partnership with many interesting initiatives planned for the rest of the season and beyond.

“We are at a very exciting time in the team’s history with tremendous potential for the years ahead so it is particularly rewarding to work with a partner who shares our vision.”

The pharmaceutical firm’s logo appeared more intensively on the E22 at the Canadian Grand Prix earlier in the season and the success of the activation has led to further initiatives planned between the two.

Jonathan Martin, EMC CMO commented: “For the past year we have enjoyed working with Lotus F1 Team during a time when the transformational power of technology and innovation has never been more pronounced.

“EMC is looking forward to deepening our partnership with a number of exciting initiatives that promise tremendous opportunities for the team’s near- and long-term future.”