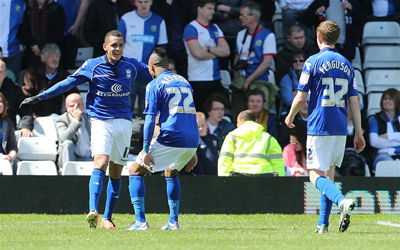 E-Cigarette Brand to Promote on Birmingham City Kit Next Season

Birmingham City Football Club will have the logo of electronic cigarette company Nicolites on the front of their shirts for the upcoming Championship campaign.

As a part of the deal the Birmingham-based firm become the club’s principal sponsor and the link with last season’s official charity partner will also continue.

Help Harry Help Others will continue to have their logo on the front of all junior, infant and baby shirts for the 2013-14 season and will also feature on the Blues Academy’s playing kit.

Nicolites managing director Nikhil Nathwani said: “As a Birmingham-based company we are proud to be able to support Birmingham City FC as the club and fans look forward to a successful season both on and off the pitch.

“This new partnership demonstrates our commitment to the West Midlands region and to one of its largest football clubs.

“We are also very pleased to be joining forces with young Harry Moseley’s mother Georgie and the Help Harry Help Others charity. It is a wonderful Birmingham-based charity first launched by brave Harry as he battled cancer.”

Nathwani went on to play down fears that children would be exposed to the electronic cigarettes and said: “We are keen to ensure that our products are in no way targeting young children.

“Our products are for adults that already smoke, who are looking for a tobacco free alternative.

Ian Dutton, Blues’ head of commercial at Birmingham City FC added: “We are delighted to have secured an outstanding principal partnership with one of the most successful Birmingham-based businesses in recent years.

“Although they are a national brand stocking in major retail outlets, it is quite clear that Birmingham and the surrounding Midlands area is very much still at the forefront of their minds.

“This is proven by the wonderful gesture of donating part of their inventory to the club’s official charity, Help Harry Help Others, a local cause which is very much at the heart of all Blues fans and beyond.”