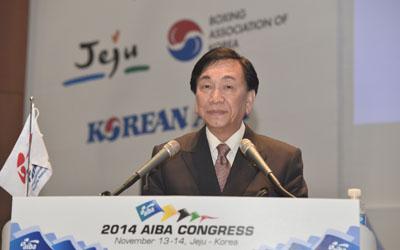 The International Boxing Association (AIBA) has officially re-elected Dr. Ching-Kuo Wu, impotent as its President for a third consecutive term.

Dr.Wu, an IOC Executive Board member, was elected unopposed by delegates at the 2014 AIBA Congress in Korea.

Speaking after his re-election, Dr. Wu said: “This is a very touching moment. You have all expressed your support for my candidature. With the confidence and trust you have given me, I can carry out the promises I made to you. And you know that I always keep my promises.

“Eight years ago, I promised I would carry out reforms and I have done so. For the next four years there is still a lot of work ahead of us. We have laid the foundations, but speaking as an architect, we need to add more layers to create a solid and enduring structure.

“I am very much looking forward to seeing the final outcome of these initiatives over the coming four years. I declare that ‘impossible is not our word’ until we have taken boxing back to its Golden Age.”

Dr. Wu also signalled his key priorities for the coming four years, which included ensuring that more women were appointed to leadership positions in boxing and continuing to expand the World Series of Boxing (WSB) competition and the AIBA Pro-Boxing competition (APB).