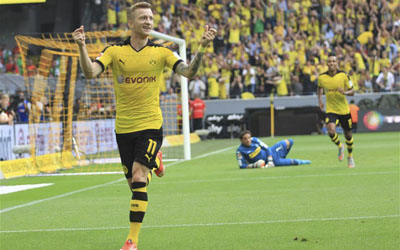 Borussia Dortmund have recorded the highest turnover in their history in the past financial year, with group revenue increasing by 36.6 percent to a record 376.3 million euro between 1 July 2015 and 30 June 2016.

This was announced today by the Chief Executive Officer Hans-Joachim Watzke and Managing Director Thomas Treß at the press conference presenting the provisional results for the 2015/16 financial year.

Excluding transfer fees, group revenue rose by 6.7% to a record 281.3 million euro in the past financial year (previous year: 263.6 million) despite the club’s absence from the UEFA Champions League. After taxes, Borussia Dortmund recorded a profit in the region of 29.4 million euro (previous year: 5.5 million).

The group’s operating result before interest, tax, depreciation and amortisation (EBITDA) amounted to 86.7 million euro (previous year 55.6 million). Henrikh Mkhitaryan’s transfer to Manchester United is not included in these figures as it wasn’t processed until after 1 July 2016. “The transfer-adjusted result amounts to almost three million euro before tax,” declared Thomas Treß.

Hans-Joachim Watzke saw the increase in turnover as a “clear sign of BVB’s earnings power” and outlined further growth opportunities in the following areas: national and international TV marketing, the upcoming reform of the UEFA Champions League from 2018 and the club’s efforts to internationalise.

“That always happens with our roots in mind. We will remain the club that we are,” said Watzke, who spoke of a “balancing act between the Borsigplatz and Shanghai” and promised that ticket and catering prices in Signal Iduna Park would remain stable. This year the prices were not increased at all; in the future they will only rise “by the inflation rate at a maximum that”.  said Watzke, “is our contribution to the balance of Borussia Dortmund’s growth”.