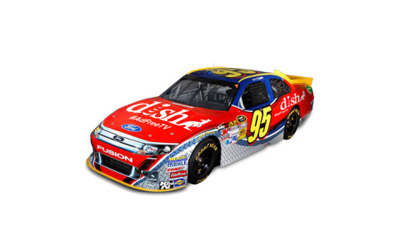 DISH has announced its sponsorship of the Leavine Family Racing’s No. 95 DISH Ford Fusion to be piloted by up-and-coming driver Scott Speed during Sunday’s Daytona 500.

Other than the Hopper logo, buy the car will be virtually ad-free, meaning consumers will see the DISH brand on FOX in spite of the network’s ongoing refusal to air ads for DISH’s consumer-friendly Hopper Whole-Home HD DVR.

“The world of technology moves fast, but FOX keeps trying to wave a yellow flag and put consumers under caution, attempting to slow their access to the best in TV entertainment,” said DISH President and CEO Joe Clayton. “The Hopper is in the pole position as the fastest in the consumer technology race. We are giving consumers what they want, when they want and where they want it. FOX is trying to hold up traffic. You can’t stop the future.”

DISH will sponsor up-and-coming driver Scott Speed at the Daytona 500. Speed is no stranger to racing and his diverse career in driving includes qualifying for the Formula One team in 2006. Speed became the first American to race in Formula One since Michael Andretti in 1993. His recent success in qualifying for the Daytona 500 makes him a great contender for Sunday.

“I’m a big DISH fan and am excited to return to Daytona International Speedway Sunday with the Hopper riding shotgun,” said Scott Speed. “Hopper is great for people like me — we can record more programming and take our favorite shows with us.”