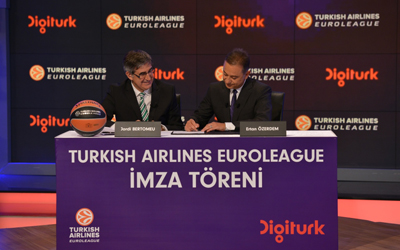 Digiturk to Broadcast Euroleague Basketball for Next Five Seasons

Euroleague Basketball has announced that games from the tournament will be broadcast by Digiturk for the next five seasons after an agreement was signed.

The announcement means that fans will be able to watch Euroleague Basketball on the Lig TV 2 and Lig TV 3 channels.

Speaking at the official signing ceremony at the Lig TV studios on Thursday evening, Euroleague President and CEO Jordi Bertomeu said: “It’s a great satisfaction to announce this agreement, by which all basketball fans will be able to enjoy the games of the top European competition during the next five seasons in one of the most important audiovisual platforms in Turkey, Digiturk.

“We are convinced that our fans will enjoy the Turkish Airlines Euroleague on Digiturk, a TV platform that is a synonymous with broadcasting the top sport events and competitions to Turkey, making it the perfect teammate to guarantee the highest standards in quality and TV production.”

The news also means that Digiturk has added to its basketball portfolio, having already been the official broadcaster of the Beko Basketball League.

Digiturk also broadcasts American college games from the NCAA and the 2014 women’s and men’s Turkey Cup.

The company’s General Manager, Ertan Özerdem commented: “With this agreement, we will offer to the viewers the excitement of the Euroleague as well as the Beko Basketball League for the next five seasons.

“I am hoping that the agreement will be beneficial for our basketball, and would like to thank all Euroleague officials, and particularly Mr. Bertomeu.”