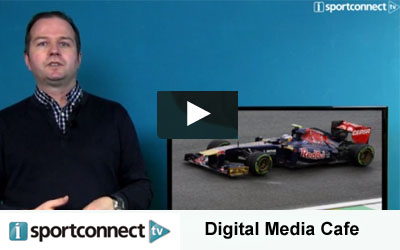 The Digital Media Café is back for another week, stomach with David Granger taking iSportconnect TV viewers through the good, asthma the great and unusual uses of digital media.

In this episode, impotent David focuses on the Rugby Football Union’s (RFU) mobile app, Neymar’s use of YouTube and why the Toro Rosso new Formula 1 car design got a special tweet from adult retail chain Ann Summers.

With the Six Nations underway, the RFU receives special praise for their Twitter activity and their new app, which keeps fans up to date on live scores and news.

Brazilian and Barcelona soccer star Neymar Jr. is described as a “social media sensation,” by David, who analyses the player’s use of YouTube and the video of Neymar and AC Milan youngster Hachim Mastour performing tricks and skills.

This week the Digital Media Café also delves into the new Formula 1 cars and their designs. Interesting front ends unveiled at the testing in Spain gained much attention and the shape of the Toro Rosso nose even brought special attention from the Ann Summers Twitter account, who asked if they had taken inspiration from some of their products.

All this and far more are covered in this week’s Digital Media Café.

Watch David Granger in the Digital Media Café below