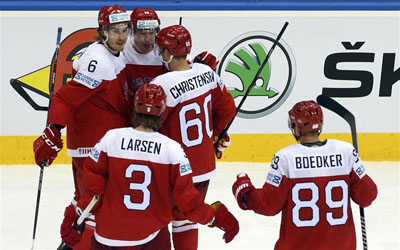 The Danish bid got 95 votes and won against the bid from Riga, capsule Latvia, which earned 12 votes from the IIHF member national associations. The proposed dates are 4-20 May 2018.

The next three IIHF Ice Hockey World Championships were awarded earlier to Prague and Ostrava (Czech Republic) in 2015; to Moscow and St. Petersburg (Russia) in 2016; and a co-hosted event in Cologne (Germany) and Paris (France) in 2017.

Denmark will be a first-time host for the IIHF’s flagship event after having hosted championships in lower divisions and last year a Final Olympic Qualification group. 13th in the IIHF World Ranking, Denmark has been the highest-ranked nation that has never had the chance to host the IIHF Ice Hockey World Championship before.

“It will be the first time that we will host the tournament in Denmark. It will be the biggest sport event on Danish ground. You made history twice,” said Henrik Bach Nielsen, the President of the Danish Ice Hockey Union and an IIHF Council member.

Latvia proposed to host the event at Arena Riga, the main venue of the 2006 World Championship, and a secondary venue to be built.

Copenhagen, the capital of Denmark with 1.9 million inhabitants and 3.8 million in the Danish-Swedish Oresund region, is the main venue for the bid with the hockey town of Herning, a city of 86,000, as second venue.

With a capacity for 12,000 fans, the Royal Arena in Copenhagen is being built and expected to open its gates by the beginning of 2016. A practice rink will be built adjacent to the Royal Arena. The arena will be located in an area between the city centre and the airport. It will be a 10-minute journey by metro and the venue’s train station allows direct connections to the airport and to Sweden. There’s also a motorway exit close to the arena. A fan zone is planned by the arena operator.