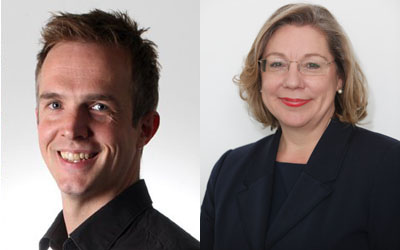 Castell joined Microsoft in April Heading up the Global Marketing and Brand Partnerships function and teams for Entertainment (lead by global personal radio and music product MixRadio), after previously holding the same position at Nokia Entertainment.

Castell was also the Head of Europe at Nokia Entertainment prior to that.

Jennie Price has been at Sport England since 2007. Since joining as Chief Executive, she has successfully implemented a new strategic approach to investing in community sport, which has resulted in the highest number ever of people playing sport regularly in England.

She has just launched a major new campaign focused on addressing the gender gap in sports participation.

Prior to joining Sport England, Jennie was the founding Chief Executive of WRAP (Waste & Resources Action Programme) which was established by Government in 2000 and more than doubled the UK’s recycling of household waste in less than five years.

Castell and Price will be joining Crystal Palace Chairman Steve Parish, who was previously confirmed as the first panellist for the event.

Originally starting in London, iSportconnect Directors’ Club events are a gathering of exclusively invited director level delegates, partaking in a BBC Question Time-style discussion with a panel of well-established executives from the sport industry.

The event will be followed by a Christmas Dinner. The venue for the event and the dinner will be announced soon.

Michael Cunnah, Chairman of iSportconnect, said: “We are delighted to welcome Dave and Jennie on board for our next Directors’ Club in London.

“Dave has great experience working for one of the biggest companies in the world in Microsoft and Jennie has been hugely successful in her seven years heading up Sport England and it will great for us to get their insight working in these sectors.”

Social Media Policy: The iSportconnect Directors’ Club follows Chatham House rules and therefore all content must be kept inside.

We encourage delegates to tweet pictures and use our hashtag #iSCDirectorsClub but please do not quote panellists.

iSportconnect are hosting two Directors’ Clubs in the Middle East this week. The first taking place in Abu Dhabi today (10th Nov) and  another in Dubai on Wednesday (12th Nov).