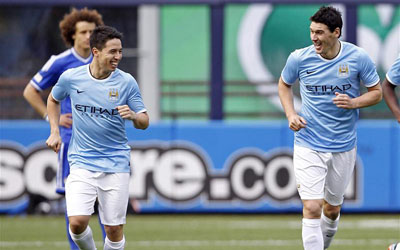 Under the deal, Daihatsu will be activating its partnership with City’s crest and players throughout their vast dealership network, spanning 52 cities.

City players will also film a TV advert later in the year and visit Indonesia this Summer to take part in local promotions, as part of City’s tour of Southeast Asia.

Chief Commercial & Operating officer for Manchester City, Tom Glick commented: “Daihatsu’s heritage and legacy within the automotive industry, in particular throughout Asia is unparalleled.  To be chosen as Daihatsu’s first ever Football Club Partner is not only a huge privilege, but a compliment to City’s growing appeal around the world.

“City and Daihatsu share both a pioneering spirit and commercial ambition, driving both brands forward.  We look forward to working with Daihatsu to create innovative campaigns for the millions of Indonesian fans and customers of both of our organizations fusing their passion for great football and cars.”

Amelia Tjandra, Marketing Director of PT Astra Daihatsu Motor (ADM), Daihatsu sole agent in Indonesia, who said: “Football is arguably the most popular sport in Indonesia, played on all levels throughout the world’s 4th largest population.  Manchester City enjoys a huge following in the region and Daihatsu’s market share has grown and grown over the last four years, to the second largest for eco-friendly compact cars in the country.  Through synergising our resources and customers bases, we have the opportunity to engage with Indonesia like never before.”