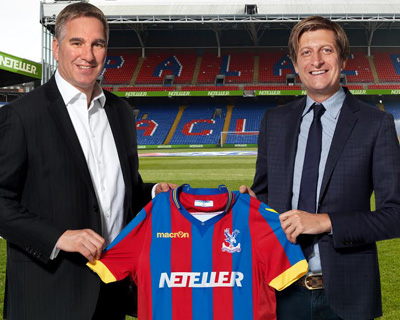 Premier League football club Crystal Palace have signed a two year official sponsorship deal with Optimal Payments PLC, thumb which will see the Neteller brand on the front of their shirts.

The deal means that Neteller will be the first Premier League sponsor from the online payments space.

Crystal Palace Chairman Steve Parish said: “We are thrilled to have NETELLER on board and really excited at the prospect of working with them on the growth of its online payments business.

“As soon as we met the team they felt like the right partner for us and it was important for the vision of our club to work with an exciting, multi-market consumer brand. Both Crystal Palace and Optimal Payments have experienced tremendous growth over the last few years and I feel confident we can help each other to continue that path.”

Neteller Executive Vice President Lorenzo Pellegrino said they were delighted to have partnered with a team in the Premier League, giving them a wide global reach.

“The chance to partner NETELLER with the global reach of the Premier League is massively exciting in its own right, but what’s also important is the ability to work with merchant partners already operating in the Premier League space,” said Lorenzo.

“This partnership gives NETELLER the platform to promote our services on a whole new level; putting it alongside major global brands like Barclays, Nike, Emirates, Samsung and General Motors.”

The partnership was negotiated by sports marketing agency SportQuake who will also assist in managing and delivering the global sponsorship campaign.