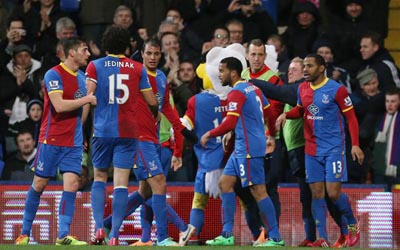 The deal was announced during half time of the South London club’s 1-0 victory over Hull on Tuesday 28 January and will kick off from July 2014.

Palace co-Chairman Steve Parish confirmed that both players and fans had been consulted over the new deal, which sees the Eagles move away from their partnership with Avecsport.

Parish said: “We are really excited that we are able to bring you a leading brand together with a unique bespoke kit. We tested the playing, training kit and leisure wear on players and fans against a range of competitors and Macron was easily the most popular.

“Whilst the players liked the sleek fitted shirts and training wear, the Italian designed leisure range was a huge hit with fans and players alike.”

Parish also confirmed that the club had hired Mike Pink to run their merchandising and retail operations in a move that ended their association with JSPL.

Parish added: “I would like to put on record our thanks to JSPL who have run our merchandise department for the last few years but I felt we needed to be masters of our own destiny and to that end we have taken on Mike Pink from Wembley Stadium to run our merchandising and Retail operation from next season.

“I am genuinely excited about these changes and look forward to improving all areas of our retail offering from next season.”

The CEO of Macron, Gianluca Pavanello commented on the kit deal: “We are very proud to start this relationship with such a prestigious club as Crystal Palace FC. Macron wishes to be associated with top clubs where the company’s principles of high quality customised products according to each client’s requests and needs can be further demonstrated.”

Macron are the kit suppliers for fellow Premier League side Aston Villa, as well as Leeds United, AS Monaco, Napoli, Lazio and more.