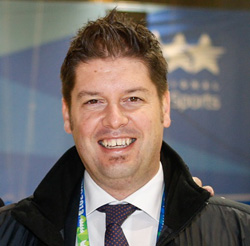 Crowdfunding and Sport: A New Item in the Budget – Filippo Bazzanella

The economic crisis also damaged sport, a segment of the society that pays before the economical juncture of others. In this scenery the sport activity and the event organizations should find “alternative”roads to guarantee itself an economical–financial stability, developing at the same time a “social” message that until now was used only like a “spot” which can become an essential element of the organizational sport structures to world level.

Crowdfunding is by definition,”the practice of funding a project or venture by raising many small amounts of money from a large number of people, typically via the Internet.” Sport event organizers, federations, sporting clubs,and many other stakeholders of the worldwide sport family have heard this name many times over the years.

When we implement new technologies in building construction or new methodologies of treating diseases, we can not decide the effectiveness of them before years of tests. This is more or less the case of crowdfunding, especially in sport.

We now have literature, case studies, methodologies and figures. Although the film and music industry probably has the leadership in using this method successfully, sport discovered and applied this new way to finance events, activities and clubs.

The Crowdfunding Centre’s May 2014 report identified the existence of some primary types of crowdfunding:

1. Reward-based crowdfunding: entrepreneurs pre-sell a product or service to launch a business concept without incurring debt or sacrificing equity/shares.

2. Equity-based crowdfunding: the backer receives unlisted shares of a company, usually in its early stages, in exchange for themoney pledged. The company’s success is determined by how successfully it can demonstrate its viability.

More over we could add:

We have many crowdfunding platforms where people can safely ask for or donate money: i.e. Kickstarter, Indiegogo, RocketHub, and RockThePost.

For the Winter Universiade Trentino 2013 we used Indiegogo platform, we created a profile containing a short video, an introduction of our project, a list of rewards per donation, and some images. The idea was to create a compelling message that readers had to be attracted towards. We wanted to find financial support for some social and environmental projects directly related to the event organization.

We prepared two campaigns to achieve our goal: a defined amount of money in a fixed number of days. Once the project was launched, each day would be counted down and the money raised was tallied up for visitors to follow its success.

Why crowdfunding for the Universiade?

Imagine if every major international event had a campaign such as this one. The greater the event, the greater the impact on the region. Rather than a financial burden, these events become an investment on development. Do you realize how many of your ideas, dreams and ambitions could be realized through crowdfunding? These were some of our motivations.

We were sure that together we could open a world of opportunities with the Universiade, setting the example for others to come.

We operated in particularly difficult conditions:

> A short amount of time

We supported the campaign by utilizing social media, creating email distribution lists before the project launched and contacting local media.

At the end we did not achieve the goal but we are aware we have traced a new way for future sport event organizers.

We have learned from mistakes:

> There was too short  a time to launch the campaign

> We needed a necessary budget lo launch the campaign and sustain it.

> Stress on the physical aspect of the campaign like the rewards

> Prepare well-structured worldwide lists of distributions before the launch of the campaign.

We are aware that we experienced something absolutely innovative for a large sport event. It has been an investment in knowledge and the hope is that such a tool can soon become a stable voice in the construction of the budget of a large event. But it should not be seen like a revenue, but a serious project and consolidated with involvement of a social base stretched in the development of special projects to the inside of a complex organization.

Personally I see a given evolution from the fact that the contributions could not only be in money but also in services and even in ideas or consultancies. Perhaps it is not born on Wikipedia, LinkedIn, Faceboook and other social networks? Sport and crowdfunding have a future in front, and we have begun to see the first developments.

Filippo Bazzanella acted as the Secretary General for the Trentino 2013 Winter Universiade Games. He held the same position for the 2017 bid, which was eventually awarded to Almaty, Kazakhstan.

He has been a lecturer at the School of Sport of Italian Olympic Committee in Rome, and since 2009 has been the creator and director of the sport project for the University of Trento: Unisport. Filippo also has the required license to be a football player’s agent.