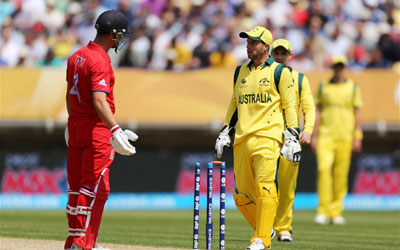 Cricket Australia has launched its new advertising campaign today ‘The Rivalry That Unites Aus’ to promote the 2013/14 Commonwealth Bank Ashes Series this summer.

The campaign highlights the intense rivalry between Australia and England and features former Australian Prime Minister John Howard and Aussie rock icon Jimmy Barnes on the edge of their seats as they cheer on Australian captain Michael Clarke going into bat for our nation.

As a keen follower of Australian cricket Mr Barnes said he was honoured to be involved in promoting the 2013-14 Commonwealth Bank Ashes Series which will transfix the nation this summer.

“The Ashes is a battle that almost all Australians, including myself, are passionate about. I love what it brings out in every player and every fan,” Barnes said.

“It’s not just about the winning, it’s more about the courage and determination the players show and what that makes the country feel. It’s about giving everything you have to be a part of something that brings us all together.”

Developed by GPYR, the commercial brings to life the notion that The Ashes is more than a game of cricket, it’s the epitome of world’s greatest sporting rivalry with the unique ability to unite the nation.

Cricket Australia Senior Manager – Marketing, Julian Dunne said the advertising campaign highlights the rivalry and tension that exists amongst the players and fans in an Ashes year and was delighted with the result.

“Cricket is the number one sport in Australia for passion and we wanted the campaign to capture the intense passion, rivalry and anticipation that only an Ashes Series can deliver,” Dunne said.

GPYR Senior Copywriter, Evan Roberts said he hoped the ad would encourage more Australians to get behind the Australian Cricket team as they battle it out for the urn.

“This Ashes campaign is all about the rivalry that exists between Australia and England. The rivalry is bigger than just a game of cricket, wanting to beat the English is part of who we are as a nation. Our hope is that this ad will encourage more Aussies yelling support over the fence, at their TVs and radios this summer,” Roberts said.