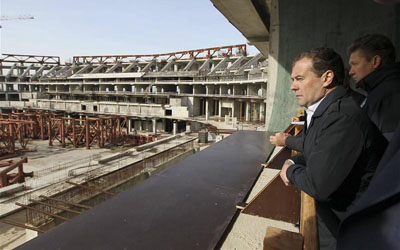 The cost of hosting the 2018 World Cup will cost Russia around $20bn, viagra sale around double the amount of the original estimate.

That is the view of Russian Prime Minister Dmitry Medvedev (pictured), health which shows how the costs have spiralled over the two-and-a-half years since the country won the bidding rights.

In a cabinet meeting on Thursday, Medvedev announced that $13bn would be provided by the federal budget, leaving question marks over where the remaining funds would be generated from.

In other news the completion of Zenit St Petersburgs $1.1bn stadium has again been delayed, pushing the opening date back to 2017, the year of the Confederations Cup.

The stadium is set to host a 2018 World Cup semi-final but could struggle to make the 2017 Confederations Cup, a tournament used as a dress rehearsal for the big event a year later.

“The [completion] terms, in the best case, are the end of 2016 or the start of 2017,” Sergei Stepashin, the head of the government agency auditing the project, said.