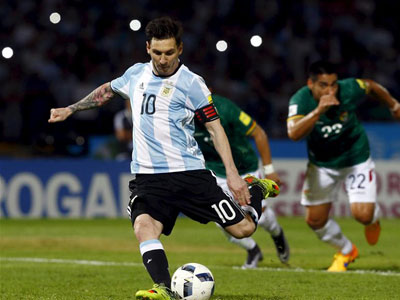 Copa America Centenario to use Hawk-Eye for the first time

The camera-based system will be installed in all 10 stadiums before the tournament kicks off on June 3 at Levi’s Stadium in Santa Clara, California.

Hawk-Eye was the first company to receive a FIFA GLT license and was used during the 2015 Women’s World Cup.

It is also utilised by UEFA, the English Premier League, German Bundesliga, Dutch Eredivisie, and Italian Serie A to deliver GLT services.

The Hawk-Eye system deploys seven cameras per goal, using control software to track the ball within the goal area.

Using vision-processing techniques and software, Hawk-Eye indicates whether or not a goal has been scored within one second with a vibration and visual signal on each match official’s watch. The whole process takes less than a second, from the moment a goal is scored, to the moment the official receives notice of the goal to their watch.

The tournament, which includes half of the world’s Top 10 nations per the May FIFA Rankings, will open on Friday, June 3, when host United States welcomes Colombia to Levi’s Stadium in Santa Clara, California, in Group A action. The inaugural match will kick off at 9:30 p.m. ET, live on FS1, Univision, UniMas and Univision Deportes Network.