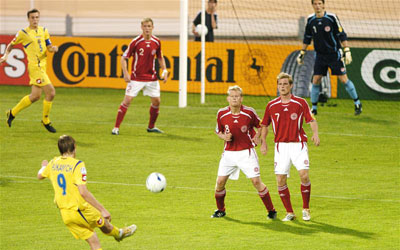 European football’s governing body UEFA and tyre manufacturer Continental have extended and expanded their sponsorship agreement through to 2017.

Continental is already a sponsor of the UEFA Euro 2016 competition in France, as well as the FIFA World Cup in Brazil, but will now see branding on touchline advertisement boards during qualifying matches for Euro 2016.

The Hannover-based firm will also receive rights packages for other UEFA events such as the Under-21 Championships in 2015 and 2017, UEFA Women’s Euro 2017 and UEFA Futsal Euro 2014 and 2016 tournaments.

Nikolai Setzer, Continental Executive Board Member said: “This move sees us extending our commitment to 2017 as we continue to focus squarely on football as a strategic communications platform for our premium brand Continental.

“Our ongoing promotional presence at major football tournaments – from the 2006 FIFA World Cup in Germany and UEFA Euro 2008 in Austria and Switzerland to the 2014 FIFA World Cup in Brazil -has already taken us a long way in terms of raising international awareness of the brand.”

Continental will also see advertisements at the qualifiers for the 2018 FIFA World Cup in Russia, as well as a strong presence on the official website.

“As a long-standing partner of the UEFA European Championship, this rights package provides an ideal bridge for the company to firmly establish itself across European national team football.

“By also coming on board as sponsor of our other national team tournaments – under-21, women’s and Futsal Euros – we can now look forward to working with Continental throughout the four year cycle and providing them with a strong platform to promote their brand and engage with their target audience.”