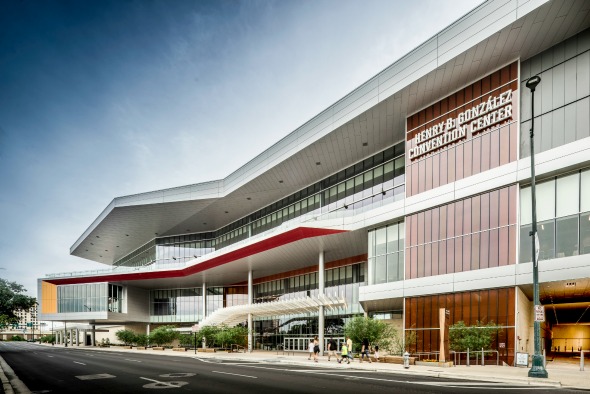 Every city has a story to tell, and the buildings and public spaces within it are the mouthpieces through which their stories are told. Keeping the narrative consistent is vital, and new buildings, especially convention centers, need to be designed with connectivity to their districts to ensure this. When a city’s civic, sport and entertainment activity spaces are conceived of as a comprehensive destination experience, an outline is provided for the city as a whole to dynamically grow.

Designing facilities to be connected – visually and physically – to their regions, having ample outdoor space, and unique, breakout meeting spaces are key in differentiating convention centers and attracting conferences and events. It is an approach rooted in hospitality; focused on understanding the dynamics, possibilities and opportunities of a city to provide residents and visitors a multi-faceted experience.

Two new convention center projects that follow this philosophy are the Henry B. Gonzalez Convention Center in San Antonio, Texas and Darling Harbour Live, a HASSELL + Populous joint venture, in Sydney, Australia. Each stands as an anchor point in the city they reside; reflecting the dynamism and cityscapes of San Antonio and Sydney, respectively.

Michael Lockwood, leader of Populous’ convention center practice in America, was a member of both design teams, and I worked closely with him during the early stages of the design phase of Darling Harbour Live. Both buildings illustrate the importance of weaving unique features and connectivity into a city’s event and activity destinations, as Michael explains drawing on the Henry B. Gonzalez Convention Centre expansion to illustrate.

Part of a multi-facility events strategy, the Convention Center expansion in San Antonio commanded an additional 12 acres of open space to provide the city with a much- needed civic amenity to connect the building to the city fabric and allow the public to use the space.

This new 12-acre segment of Hemisfair Park will become an epicenter for outdoor events – it is a large civic space San Antonio residents and guests have wanted for years.  Allowing for the development of the park, the expanded convention center also needed to connect with its neighbor, the Alamodome. Our designers took this opportunity to develop out-of-the-box concepts and provide the city with numerous options that physically and gesturally connect the convention center to the stadium, Hemisfair Park and River Walk to the east. This kind of visionary thinking aimed to capture and celebrate what makes San Antonio such a unique destination while giving city leaders an urban framework for how to shape the future of the city.

It is important that cities understand the potential to capitalize on multi-facility and multi-day events, like the NCAA Final Four and the Super Bowl. Visitors and residents may only enter the convention center for events, but the building will feel more connected to the urban fabric of San Antonio because of its relationship to other civic landmarks, allowing better opportunities for retail integration, mixed-use development and incorporation of public gathering spaces, like Hemisfair park.

These facilities serve as visual anchors for the city and eventual iconic experiences within a given destination. For example, we suggested using the Tower of Americas in Hemisfair Park, the site of the 1968 World Fair, as a civic wayfinding tool for visitors in San Antonio who are moving between the convention center and Alamodome. The Tower is representative of the city’s rich history and serves as a visual connection to San Antonio’s heritage, story and iconic buildings, like the Alamodome and convention center, that are now as much a part of San Antonio as the Riverwalk.  Finding opportunities that stitch together the iconic elements of a city, whether old or new, provide an interconnected experience patrons will remember.

Darling Harbour Live is a joint venture between HASSELL + Populous. As the Populous design lead for this Public Private Partnership project, Richard Breslin explains key design features that contributed to its success:

The re-making of Darling Harbour was a rare opportunity to design a significant new quarter within the urban heart of Sydney, Australia. The precinct extends the urban fabric and reconnects the city to Ultimo and Pyrmont with more permeable networks of streets and lanes. It brings a new level of public amenity for visitors and citizens alike through extended public parkland that is identifiably ‘Sydney’ in character.

These public amenities were one of the most important features. The design aspired to create more public open space than was there before. Historically, these types of buildings aren’t normally the greatest of neighbours. They were big, often blacked out boxes that rarely engage with or respond to the outside environment. That’s not what Darling Harbour Live is – it is about being welcoming and enjoying what makes Sydney a truly global and unique city. It does this through a design that is truly permeable.

Each building within Darling Harbour has key features which allow those inside stunning views of Sydney. The Exhibition Centre features meeting room pods and break out spaces which extend out over the park and event deck with views to the city, the Convention Centre features a large balcony off the pre-function space which looks out over the harbour, and the Theatre reconnects visually with the Sydney CBD on each level. Each of these areas are also viewable from the outside, beckoning people in and creating a vibrant energy for those outside. The corridor down Tumbalong Place will be activated with a high-end bar to create life and energy before, during and after an event, as well as on non-event days. Opposite this bar there will be new activation and artwork to  enliven Tumbalong Place as people make their way to and from the light-rail stop.

Darling Harbour Live is a fusion of architecture and landscape, of indoors and outdoors, of engagement, education, living, creative working and entertainment. The project demonstrates the importance of responsive design for sustainable urban life for our cities and communities. It’s about creating spaces where we can gather, work, live and play; places that are dynamic and alive 24 hours a day.

Weaving connectivity into convention centers and event spaces transforms them into civic anchors where experiences will meld with one another, complementing and enhancing the experience of a city. With a well-conceived approach to the destination experience, cities can create stronger, more connected communities that continue to grow and transform long after the facilities are built.

As the design director for Populous’ Americas convention center practice, Michael is actively involved in all phases of design, production and presentation for public assembly projects. Michael provides design leadership and coordinates with client representatives to reach design goals through highly collaborative and interactive design workshops, encouraging cities and communities to actively participate in the design, planning and aesthetic of major civic structures.

Michael was recently awarded Engineering News Record Midwest’s 2013 “20 under 40” award as well as KC Business Magazine’s 2013 Rising Star award.  This annual program honors rising design and construction professionals on the basis of their contributions to their profession and community.