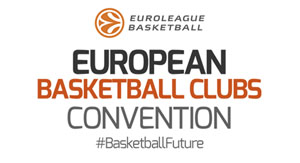 A historic gathering of nearly 100 clubs and national leagues representatives from across the continent came together for a first-of-its kind European Basketball Clubs Convention in Barcelona on Wednesday to debate the future of their sport.

The convention, organized by Euroleague Basketball, established a platform to decide where basketball needs to focus its attention, resources and effort in order to attract more fans to the game and build a competition model that will assure growth and success for years to come.

“This convention is a space of reflection and debate about our future, where everyone has the opportunity to make their opinions heard,” Mr. Bertomeu said while welcoming everyone. “Here, we want to share the strategies, the vision of future, and the paths we need to follow to keep on growing.”

The paramount role of the clubs in deciding the roadmap to basketball’s long-term future in Europe formed the basis of a speech by Mr Mizrahi of Maccabi, the longest-serving club president in Europe.
“The sports club is like a company in every way, since it is their owners and managers, and only them, who have to determine the club policy,” Mr. Mizrahi said. “It isn’t logical that a third party would instruct them how to run their business. “We must support and strengthen the clubs if we want there to be a bright future for basketball.”

How model clubs should look in the future was the subject of a presentation by Mr. Pommer of the German BBL, who emphasized that a much-needed sustainability at the club level requires diversification of revenue sources and coming closer to fans by knowing, and fulfilling, their interests.
“My perspective is you should invest in stones and not only bones. Invest in gyms, structures and other professionals, not only players,” Mr. Pommer said. “Sports management must be based on continuity, long-term thinking, not short-term thinking. I know it’s a challenge with the media, fans and the environment we live in. Nonetheless, this is what we should be striving for.”

Next, Mr. Bertomeu discussed a Euroleague Basketball proposal to unite clubs and domestic leagues behind an ambitious new model for club competitions that honors European basketball’s tradition of promotion and relegation based on sporting results at the same time that it rewards modern management integrity on and off the playing court.

“If a club wants to compete at the highest level, it should do its best to offer the best conditions and fulfill the highest standards,” he said. “And it should be convinced that if it makes this effort, this investment, its future will only depend on its sports success.”

Mr. Bertomeu emphasized that stability and a clear path for ambitious, well-managed clubs to reach the elite will spur growth and make European competitions more attractive to both new and existing fans.

“The clubs and the leagues need stability,” he said. “Stability gives the opportunity to the leagues and the clubs to develop medium- and long-term projects. Stability gives the opportunity to attract investments.”The best of our situation is that we depend only on ourselves. This is an ambitious programme, and we would like all the stakeholders to participate in it.”

The convention continued with a panel discussion including  Mr. Francini of IMG and Mr. Agnelli of Juventus FC, who along with Mr. Pommer took questions from both the attendees and fans following on Twitter.

Mr. Agnelli drew a link between financial stability gained by investing off the playing field and the improvement of results on it. He cited his club’s new, smaller stadium that nonetheless brings in more revenues than the previous, bigger one and is integrated into a campus offering more than just football entertainment to the fans. “We are creating a Juventus ‘neighbourhood’, which includes the stadium, the museum and we are planning to move there both the training centre and the headquarters. Juventus is also attracting investments from third parties in this new real estate and leisure area of Torino, “Mr. Agnelli said. “We all know how much giving players a great atmosphere helps them perform better and gives the fans a great show.”

Mr. Francini of IMG focused on the passion that defines the unique relationship between clubs and fans and sits at the heart of the business of sports.
“There’s a deal to be done between the club and its fans,” he said. “It’s a deal that is on-site experience and also a community deal, an engagement deal. You want to enable fans and supporters to experience the very best during the hours they are with you.”