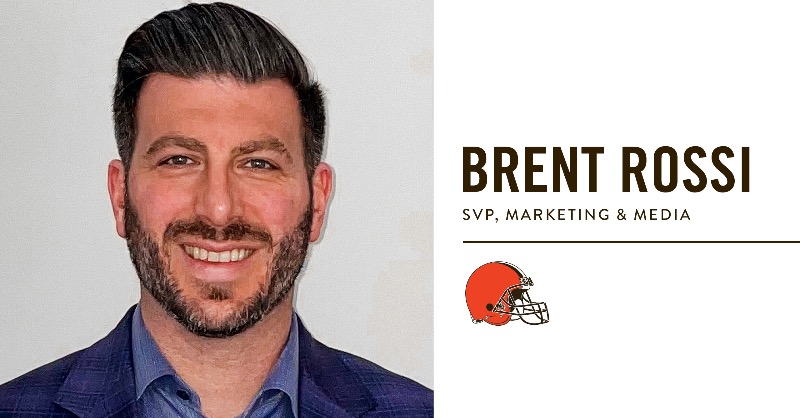 The Cleveland Browns have announced Brent Rossi has joined the team as Senior Vice President of Marketing and Media. A 2018 SportsBusiness Journal “Forty Under 40” honoree with more than 17 years of experience in the sports and entertainment industry, Rossi will lead the organization’s goal to further provide Browns fans with premier experiences and engagement opportunities throughout the year, including through his oversight of the marketing; events; digital, video and radio content; website and social media; community relations; and creative services departments, as well as Browns Backers Worldwide.

Rossi spent the past three years as President of Business Operations for the American Hockey League’s Bridgeport Islanders, where he directed the overall execution of the club’s daily business initiatives and the implementation of its long-term vision and mission. In this capacity, he also managed fan engagement for the parent-club New York Islanders, guiding community relations, the Islanders Children’s Foundation, youth and amateur hockey programming, retail operations and supporter relations.

“Brent has tremendous marketing and fan engagement experience within the NFL and across the sports and entertainment industry, and he is another excellent addition to our senior leadership team both from an innovation and culture perspective,” said Haslam Sports Group Executive Vice President and Chief Operating Officer Dave Jenkins. “We are confident his past leadership and creative mindset will continue to enhance our ability to bring Browns fans closer to their favorite team, especially given his familiarity with the team’s history and impact in Northeast Ohio.”

“Growing up as a passionate Browns fan in Canada, I have a personal appreciation for what this team means to the City of Cleveland, Northeast Ohio and our incredible fans across the country and globe,” said Rossi. “This truly is a dream job for me, and I am excited about the opportunity to contribute to a talented leadership group that is fully devoted to creating unique, exceptional memories for Browns fans throughout the year.”

As EVP of Marketing and Business for PSE, Rossi led all marketing and ticketing efforts within the organization’s portfolio, highlighted by the Bills and Sabres. Additionally, he was selected as the Chief Administrative Officer for the Sabres in 2018 to oversee business operations for the franchise.

In 2015, the Bills were honored as the NFL Team of the Year for Digital Media, Social Media and Content under the direction of Rossi, who was recognized among Canada Sports Business Awards’ “5 to Watch” in 2017.

Rossi earned those roles with PSE after initially joining the group as Vice President of Marketing & Business Strategy for the Sabres in 2012.