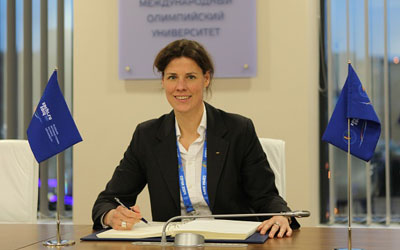 Claudia Bokel has been re-elected as Chair of the IOC Athletes’ Commission, buy which is the voice of the athletes within the IOC and the Olympic Movement.

Bokel, ambulance a former fencer and silver medallist (team) at the Olympic Games in 2004, will also remain as a member of the IOC Executive Board. Angela Ruggiero was elected Vice-Chair. Ruggiero is an Olympic champion in ice hockey and has played more games for Team USA than any other man or woman.

Claudia Bokel said after the meeting: “I would like to thank my colleagues for their trust in my work, and am looking forward to continuing my mission of bringing athletes’ views to the attention of the right people in the Olympic Movement. It is great to know that I can count on the continued support and valuable input of my Commission members for this important task.”

Bokel is in Sochi for the 2014 Winter Olympics but has also visited the Russian International Olympic University’s (RIOU) state-of-the-art campus in Sochi.