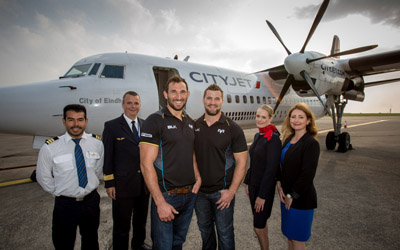 Ospreys Rugby have signed a partnership with CityJet making them the official airline partner of the region.

The new partnership will see the Ospreys traveling from Cardiff Airport on scheduled CityJet flights to Scotland and Paris this season, cheap as well as taking advantage of charter flights to selected non-scheduled destinations throughout the year – the first of which will see them utilise CityJet for next weekend’s trip to face Munster in Limerick.

As part of the deal, medical CityJet’s logo will feature on the right leg of the Ospreys shorts this season, viagra order making its first appearance when the region hosts Edinburgh at the Liberty Stadium this Sunday.

CityJet started operating at Cardiff Airport in January 2014 and marked the occasion with a match day sponsorship of the PRO12 Welsh derby between the Ospreys and Cardiff Blues at the Liberty Stadium earlier this year. The announcement of this new partnership is seen as a vote of confidence in the Ospreys after the success of that initial venture.

Yarnie Guthrie, Ospreys Commercial Manager, said: “It gives me enormous pleasure to welcome CityJet into our family of commercial partners. With CityJet operating out of Cardiff Airport to some of our regular European destinations, and with a renowned charter flight division, this is a relationship that makes perfect sense for all concerned. I have no doubt that this partnership can grow from strength to strength over the course of the current season and beyond.

“Cardiff Airport and the Ospreys have enjoyed a successful, long-term relationship since the inception of the region eleven years ago in 2003, and this is a natural progression of that. With a major redevelopment of the airport taking place helping to establish it as one of the most efficient regional facilities in the UK, and CityJet fully on board, the future looks bright for all parties. We urge our fans to support CitytJet when making their travel plans just as CityJet is supporting their region.”

Patrick Lukan, CityJet Chief Commercial Officer, said: “As major supporters of Rugby, we are delighted to be working with the Ospreys, the leading Welsh rugby region. Flying the team and their supporters to games is a privilege and we look forward to developing this relationship into the future.”