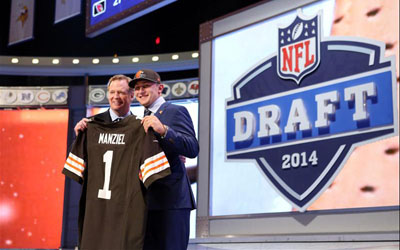 The National Football League (NFL) have announced the 2015 NFL Draft will be held in Chicago moving the event from New York.

The event will be held between April 30-May 2 at the Auditorium Theatre of Roosevelt University in Chicago.

“We are excited to have fans from throughout the midwest experience theNFL Draft,” NFL Commissioner Goodell said in a statement. “We look forward to returning the event to the city of Chicago and working with the city, Choose Chicago, and the Chicago Sports Commission to create a week-long celebration of football for our fans. Mayor Emanuel and the city of Chicago presented us with numerous ways to enhance the Draft experience for our fans and incoming players.”

The Windy City beat out Los Angeles, which was the other finalist in the running to host the league’s marquee event next year. Various sites across the country expressed interest in hosting the affair but couldn’t beat out a strong bid from Chicago that was backed by Emanuel.

“Chicago is pleased to welcome the 2015 NFL Draft to America’s heartland,”Chicago Mayor Rahm Emanuel said in a statement. “Next year, NFL fans from across the country will travel here or tune in as the future of their team is decided in Chicago. We look forward to working with the Chicago Bears, the NFL, and our neighborhood partners to make this an event that highlights our world class city and reinvests in our communities.”

The event had been hosted in Radio City Music Hall in New York since 2006.