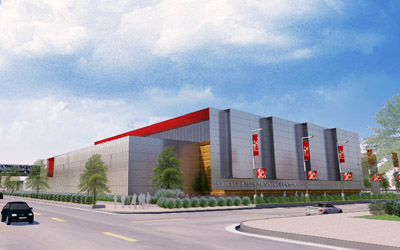 The NBA’s Chicago Bulls are to build a new basketball practice facility on a site next to the United Center, the team announced today, releasing a preliminary architectural rendering of the planned facility.

“I am pleased that the Bulls are moving their practice facilities into the City of Chicago and continuing the great work revitalizing the entire neighborhood around the United Center,” said Mayor Emanuel. “The Bulls are an iconic championship team and a source of pride for our city. Their future, and the future of the West Side, is bright.”

The location planned for the new facility is Parking Lot J, which sits east of the United Center across South Wood Street between Monroe and Madison Streets. Plans for the new facility remain in development and the project, which will be funded completely by the Bulls, is scheduled for completion in time for the 2014-2015 season.

The facility is anticipated to be approximately 55,000-square-feet in size. The firm, 360 Architects, has been selected as the lead project architect, and McHugh Construction has been named the General Contractor. The Bulls are committed to providing opportunities for Chicago-based companies, including women/minorities owned businesses, to be selected as part of the construction project.

“Today’s announcement is the latest example of our longstanding commitment to the City of Chicago and to our fans,” said Bulls Chairman Jerry Reinsdorf. “Investing in a modern facility for our players and coaches will help us to achieve our team’s number one goal – winning championships – while also playing an important role in the city’s ongoing redevelopment efforts in our West Side neighborhood.”

When the team announced the practice facility relocation earlier this year, Reinsdorf credited the Mayor with the idea to move the facility.

“Mayor Emanuel has done a tremendous job promoting investment in the City of Chicago. The Mayor stressed that the Bulls brand is important to the city, nationally and internationally, and that the Bulls represent the spirit and competitive grit of Chicago. He thought centralizing our team assets inside the city limits would be a demonstration of our ongoing commitment to Chicago. We had been contemplating how to address the growing demands on our current practice facility for awhile, so the Mayor’s timing and ours made sense.”

The Bulls have practiced at the Sheri L. Berto Center in Deerfield, IL, since 1992. The team intends to sell the current practice facility.

“We share Mayor Emanuel’s vision for the West Side and are proud that this new facility will be a major part of that vision,” said President and COO Michael Reinsdorf. “Our current practice facility presented some limitations for us and as we looked to invest in the team’s future, we recognized the importance of also investing in our community.”

“I am pleased that the Bulls are planning to build this new facility in the shadow of the United Center, and I commend the team for their continued work to bring economic opportunity on the West Side of Chicago,” said Ald. Walter Burnett, 27th Ward. “I look forward to working with the team and the Mayor’s office as we go through a community process to make sure this proposed facility integrates seamlessly and productively into the surrounding neighborhood.”