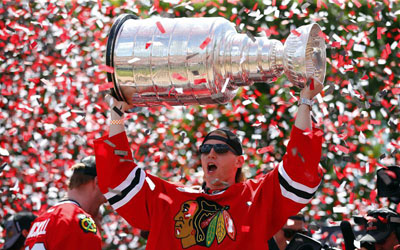 Though the current agreement wasn’t set to expire for another two years, the extension keeps Blackhawks hockey on “Chicago’s Very Own” through the conclusion of the 2018-19 NHL season.

WGN-TV has been one of the flagship stations for Blackhawks television broadcasts since the start of the 2008-09 season.  Under the agreement, WGN-TV will broadcast 20 regular-season games each year on free, over-the-air television.

“WGN-TV is synonymous with Chicago and is the perfect partner to continue to help serve our expanding fan base,” said Blackhawks President & CEO, John McDonough.  “From Lloyd Pettit to Pat Foley, WGN-TV has been a highly-valued member of the Blackhawks family.”

“The Blackhawks leadership is best in class and we are extremely happy and proud to bring the team’s games to the greatest sports fans in the country,” said Larry Wert, President of Tribune Broadcasting.  “Serving our viewers and advertisers with great sports programming is part of our mission and heritage.  The Chicago Blackhawks franchise and fan base has never been stronger and we expect the team’s popularity to continue growing.”