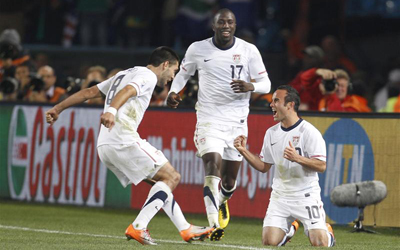 Chevrolet has signed a three-year sponsorship agreement with the United States Soccer Federation that sees the automobile brand become an official partner of US Soccer.

As a part of the agreement Chevrolet will support a number of US Soccer initiatives including the One World Futbol Project, anesthetist a plan that distributes footballs to young people in war-stricken nations, clinic refugee camps and areas with natural disasters.

The move follows Chevrolet’s deal with Manchester United, cialis a move that will see their logo on the Premier League champions’ shirt for seven years starting in the 2014-15 season.

The deal also highlights the growth of soccer in the States and Molly Peck, director of Chevrolet advertising and sales promotions said: “Soccer is just growing so much here in the U.S. that it makes total sense to get in with soccer.

“It is where our customer is. It reaches such a great group of demographics.”

“Our new US Soccer partnership complements Chevrolet’s global soccer footprint that includes Manchester United and One World Futbol Project sponsorships. By bringing our customers closer to these initiatives, we’ll share the love of soccer all over the world.”

US Soccer President Sunil Gulati added: “Chevrolet has an impressive history as a global brand and we’re excited to begin this partnership. We are looking forward to working closely with such a committed and supportive company across all of our national teams, especially our youth national teams and development academy.”