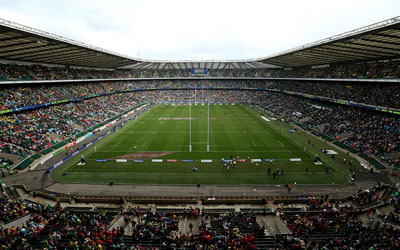 The Rugby Football Union (RFU) have revealed that Premier League leaders Chelsea have inquired about moving to the Twickenham stadium for a season.

The RFU have confirmed they have already held initial talks with Chelsea but stressed they are at a very early stage.

Speaking to the Sunday Times, the RFU said: “We are regularly contacted by a variety of organisations, within and outside sport, on a wide range of opportunities concerning the use of what we believe is a world-class stadium.

“We have had an inquiry from Chelsea FC but have not had any discussions of any substance.

“While we don’t comment on any specific confidential conversations, each request is taken on its merit, assessing a variety of factors, such as the effect on the pitch, availability, transport and local considerations and other important implications.”

Chelsea announced plans earlier this year to redevelop the Bridge and a study commissioned by the Russian billionaire is looking at ways to bump its capacity up from 41,623 to 60,000.

A Chelsea spokesman told the Sunday Times: “We’re investigating different scenarios as part of the consultation process we started earlier this year, but have had no discussions of substance so far.”