Find out how millions of fans around the world get to see the race unfold. ORIOL PUIGDEMONT – A FAN’S PERSPECTIVE Oriol Puigdemont has been a motorsports journalist since 2004, covering different race categories such as MotoGP, Formula 1 and Dakar Rally. Not many people get to go ‘behind the scenes’ at a MotoGP event with […] 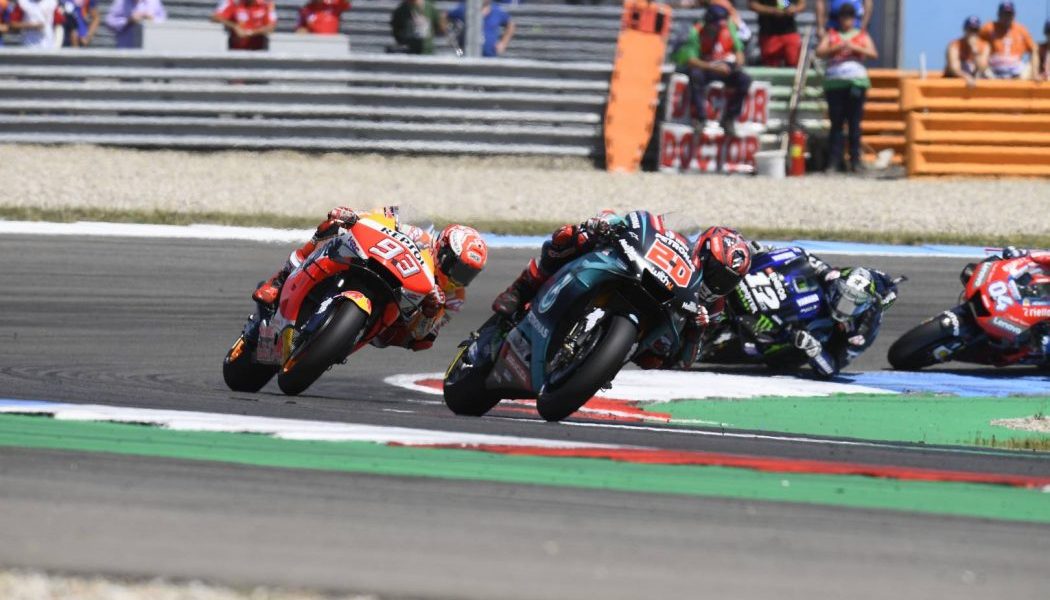 The Challenge: A Unique Capacity

Tata Communications is no stranger to live sports. They already work with Formula 1 and have proven themselves as experts in bringing together media and digital to get more quality content out to broadcasters, in a more affordable way. It’s all enabled by the high-speed optic line they set up, bespoke for every race, and connected to the world’s largest wholly-owned fibre cable network. This unique capacity allows all the action to be streamed out instantly to fans, no matter their global location.

I saw for myself, a little of how they do it, with the Tata Communications pods. These compact workstations act as temporary bases for the service team and compress the time required to set-up the cabling, screens and infrastructure needed to support the broadcast operation. The pods are expandable units that are shipped to every race, and in effect are fully-functioning, self-contained mobile data centres. They receive the international program feed from all the cameras on track, and ensure a high-speed, low-latency connection to the fibre network, which carries the feed to broadcasters all over the world. Collaborating with Dorna and working as one family, Tata Communications has revolutionised how races are broadcast.

Dorna owns the rights to MotoGP, and as an on-board camera manufacturer, has led the way in bringing new camera angles and styles to the screen, such as the first on-board bike cameras. I got the impression, though, that in the past, Dorna’s visions had been constrained by logistics. Before they started working with Tata Communications, their bandwidth around the track was 600MB; it was restricting in terms of bringing better quality content to the fans. They also had large costs in terms of the satellite coverage needed to supply their content to over 80 broadcasters around the world.

Dorna wanted to scale up the bandwidth to allow them to distribute higher quality content. They wanted someone who could deliver an international program feed, with no problems, and no delays. With the experience from F1 a key factor, a deal was soon struck with Tata Communications. That was back in February 2017, and as broadcast partners, Dorna and Tata Communications have now raced ahead. However, every sport has its own unique challenges, and as Dorna were keen to point out to me, MotoGP is no exception. It’s how you overcome those challenges.

The Action: End To End Efficiency

Tata Communications, working collaboratively with Dorna to continuously improve, has taken MotoGP and enabled the digital content to be distributed on the web and into the cloud, creating new business models such as charging for premium content. With exclusive interviews before and after races, fans have never been closer to the likes of Valentino Rossi and Marc Marquez.

With their high-speed fibre connection working in tandem with existing satellite, Dorna has increased their geographic reach and are experiencing true borderless growth. This is an end-to-end service that increases efficiencies and saves money at every turn. And it’s a model that could be applied to Moto2 and Moto3, or just about any sport, for that matter.

With the team at Tata Communications pushing the limit and dreaming to achieve more, I can really sense the possibilities here. From harnessing the power of the IoT (Internet of Things) and AR (augmented reality) to create more powerful, multi-dimensional sports experiences for fans.

I witnessed Jorge Lorenzo secure an emphatic victory in the Italian Grand Prix – his first since joining Ducati. And to me, it all seems quite appropriate. These are exciting times for MotoGP; a time for firsts. With the right partner – the right provider of bespoke telecommunications for digital and media – it’s clear that sports broadcasting is virtually limitless.

This is a sport that can go wherever it wants to – and at speed. You can see why Tata Communications live by their slogan, ‘Trusted to win’.

Through the unique solution that Tata Communications provided, Dorna now utilises a mix of fibre optics backed-up with satellite. They have 1GB of bandwidth at each track, enabling them to set up more cameras and deliver more content to the broadcasters who take their content feeds. They distribute motorcycle racing action to more than 80 broadcast partners reaching over 200 million households worldwide.

There’s low latency capability for those watching on an app or Smart TV. High quality content that can be downloaded on mobile devices and streamed for use with OTT providers. And there has been a trial to provide Wi-Fi access to fans in the grandstands (I’m sure we all hope this gets replicated at every venue pretty soon). This is a broad sweep of technological advancements; an experience that may be moving towards virtual reality and live 360 content in the future.

It’s meant that, since 2017, Dorna could put more cameras on every bike, providing 360° film and streaming live content with a feed that constantly switches between riders. I get what they’re trying to do – this is an immersive experience, where viewers feel like they’re actually in the seat, travelling around the track at over 350kmph. And this is only part of it. Through Tata Communications and Dorna’s daring approach in embracing new technology, they now have the foundations in place to take the sport to the next level.

Not just 4K High Definition feeds, but also remote production to massively reduce travel costs (previously editing was done on-site). Tata Communications can also send content direct to the broadcasters like Sky and BT, as they are part of their ‘eco-system’.

It’s all possible from the Tata Communications control centre – custom built in the run-up to the race and dismantled not long after. And amid all the hundreds of screens, and literally kilometre after kilometre of cables, I also found people who are experienced in what they do, but wanting to learn more about MotoGP’s unique and often complex needs. They genuinely care.

This is a case of a team not just managing the equipment needed for 19 races over 9 months of the year, and even digging up the road to get the fibre connection to the track, but little things, like providing mobile phone SIMs for the whole Dorna production team, so they didn’t have roaming charges when moving around the world. This is an end-to-end service that increases efficiencies and saves money at every turn.

As sports restart behind closed doors, they are following stringent health and safety protocols. Staggered entry and exit from premises, limit on traveling team personnel, extensive testing and a “bubble” concept for health and safety. With such strict caps on the number of personnel present, all non-essential functions have been moved away from the venue.

This includes functions like social and digital media management, which generally demands an onsite presence, with real time capture, edit and publish of content from the venues. Several sports are experimenting by migrating their entire social media teams to centralized, or even distributed, remote locations to enable work-from-home. As circumstances precipitate the need for technology such as remote production and remote working, Tata Communications ensures that the Dorna production team is well-placed to meet these challenges.

Find out how millions of fans around the world get to see the race unfold.

Oriol Puigdemont has been a motorsports journalist since 2004, covering different race categories such as MotoGP, Formula 1 and Dakar Rally. Not many people get to go ‘behind the scenes’ at a MotoGP event with one of the world’s largest telecommunications specialists, Tata Communications.

As a fan of the sport, and someone who makes a point of trying to keep up with technology, I thought I might have an idea of what was required to set up a live control centre and broadcast the action around the world. But, you can honestly only begin to appreciate the size and scale of the logistics needed, by seeing something like this first-hand. And I was fortunate enough to have that exclusive access at the Italian Grand Prix. I visited the Tata Communications control centre at the Mugello Circuit in Tuscany, Italy, just hours before the race was due to start.

My remit was to find out how millions of fans around the world got to see the race unfold. This is a story about what goes on behind the scenes; the vast, almost mind-blowing technology that works in the background to make it happen.