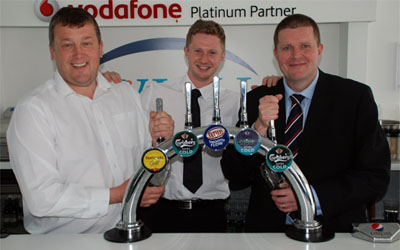 As part of the new agreement, the iconic Tetley’s brand will appear as one of the Club’s sponsors on the home and away kit during the 2014 season.

The deal follows the announcements last week that Ritz Bingo and Crossley Tyres have agreed new sponsorships with the Tigers.

Castleford Tigers’ Commercial Director, Mark Grattan said: “We are thrilled to have Tetley’s, one of the UK’s most celebrated brands, on the Club’s kit next season.

“Tetley’s is a well recognised brand and is established in Rugby League through their sponsorship of the Challenge Cup and previously of Super League.

“When the Commercial team came into the Club three months ago, one of our targets was to agree a restructured deal with Carlsberg UK and I’m pleased that we have achieved that.

“This is the latest in a number of new sponsorship deals that we will be announcing over the coming weeks, including our main kit sponsor.”

Carlsberg UK Sales Development Manager, Scott Mullooly said: “I am delighted that Tetley’s will feature on the new Castleford Tigers shirt for next season.

“It represents a fantastic opportunity to increase Tetley’s brand association with Castleford Tigers and build on our investment with the Super League and Challenge Cup.

“I believe this is testament to our longstanding business relationship and we will continue to support the Club as a partner and help to assist the Club’s ambitions for the future.”