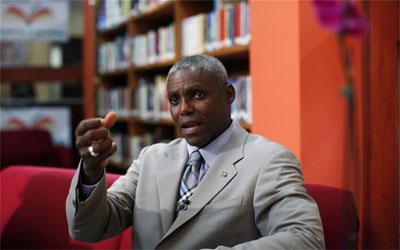 Olympic legend Carl Lewis has voiced his support for Tokyo’s bid to host the 2020 Games after revisiting the Japanese capital, where he set the then 100 metre world record in 9.81 seconds at the 1991 world championships.

The nine-time Olympic gold medallist was visiting Japan on a trip aiming to inspire young athletes in the north-eastern region of the country, which was devastated by the tsunami in March 2011.

Lewis said: “I wish them the best of luck because I think they will put on a tremendous games. I will be at the 2020 Games wherever it is, and I hope it’s here.”

“I believe in high-technology. I believe in state-of-the art new stadiums for people. It makes it more comfortable, and leads to improved performances by the athletes.

“The fans really know sports and understand the events and for me it was tremendous because when I came here in 1991 it was just this huge flow of energy.”

Tsunekazu Takeda, head of Tokyo’s Olympic bid, said Lewis’ “strong endorsement of Tokyo echoes the widespread international sentiment for our bid and our goal to deliver a dynamic celebration in the heart of Japan’s capital.”