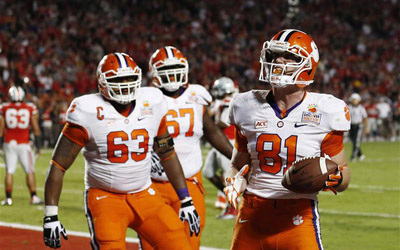 Capital One have signed a partnership with ESPN to become the title sponsor of the Orange Bowl, beginning with the 2014 spectacle.

The multi-year deal builds on Capital One’s substantial support of college athletics by becoming the official credit card and bank of the new College Football Playoff.

The Capital One Orange Bowl will play host to a College Football Playoff Semifinal  in year two of the agreement (New Year’s Eve 2015) and again in year five (2018).  In the other four years of the agreement, the Capital One Orange Bowl will feature the Atlantic Coast Conference (ACC) Champion (or ACC replacement team should the champion qualify for the College Football Playoff) against a highly ranked team from the Big Ten, Southeastern Conference (SEC) or Notre Dame.

”As a major supporter of college sports for over a decade, Capital One is excited to be the title sponsor of the Orange Bowl, especially as this legendary bowl game takes on even greater significance with the College Football Playoff,” said Marc Mentry, Senior Vice President Brand Marketing at Capital One. “Like millions of other fans, we’re looking forward to seeing incredible competition and drama play out during this new chapter of college football.”

Ed Erhardt, president of ESPN Global Customer Marketing and Sales, added, “The Orange Bowl has been home to many of the sport’s most memorable moments and greatest athletes, and being part of the new College Football Playoff creates even more anticipation.  This increased commitment will elevate Capital One’s profile throughout the college football season and we look forward to ushering in this new Playoff era with them.”

“As the landscape of post-season collegiate football evolves, the Orange Bowl looks forward to this new partnership with Capital One and continuing its long-standing relationship with ESPN,” said Orange Bowl president Luis Boué.  “Capital One’s commitment to collegiate athletics, teamed with ESPN’s reputation as a sports leader and the Orange Bowl’s championship tradition will ensure a beneficial relationship for all of us.”

The Capital One Orange Bowl is to be played on December 31, 2014, in South Florida.