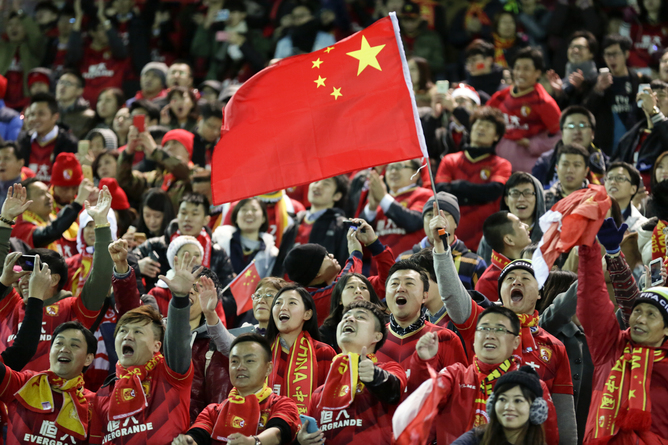 Imported stars signed for large transfer fees and paid hugely inflated wages; high hopes of success for domestic clubs competing in international competitions; stories about massive television contracts being signed that will revolutionise the game; and concerns about the perpetually under-performing national team and where it goes next.

No, it’s not the English Premier League. Welcome to China’s Super League, which starts on March 4.

The value and significance of this transfer was then surpassed by Jackson Martinez’s move from Atletico Madrid to Guangzhou Evergrande for £31m and by Alex Teixeira’s switch from Shakhtar Donetsk to Jiangsu Suning for £38m.

The acquisitions come on the back of China’s strategy last year of buying European football clubs. At the start of 2015, Wang Jianlin, Asia’s richest man and owner of the Dalian Wanda property empire, took a 20% stake in Atletico Madrid.

This was followed by an array of Chinese investors buying several clubs including Espanyol in Spain, Den Haag in the Netherlands, Sochaux in France, and a 13% stake in Manchester City.

For a country with no previous history of footballing success, many have been left bemused by these developments. Yet what we are currently witnessing is the Chinese state and its entrepreneurial lieutenants executing an industrial strategy for football that is comparable to China’s recent growth in other sectors.

Twenty years ago, China wasn’t a global superpower in, for example, the computing and IT industries. Now, it is, and the government has similar ambitions for football.

This ambition is borne of President Xi’s 2014 declaration that China will bid for the right to host the World Cup and then win the trophy (ideally on home soil). Since then, China has dived into frenzied spending that has seen heavy investment across the sports industry, but with a particular focus on the world’s favourite game.

Xi is thought to be a football fan, but he also understands what the political, economic and socio-cultural benefits of global football success can bring. Investing in the sport makes good sense – hence the sudden prominence of China’s clubs, owners, and investors.

Yet China’s football vision is not simply being played-out at the elite professional level. Grassroots football is also awash with cash. Entrepreneurs, companies and provincial governments are all scrambling to execute state policy.

Rather sneeringly, football fans across Europe and South America have dismissed China’s newfound, voracious appetite for the sport as being comparable to Russia’s ultimately unsuccessful oligarch-fuelled football revolution of several years ago. China has also been labelled as a retirement home for footballers who have decided not to follow the well-trodden path to Major League Soccer in the United States.

Yet these views are both dismissive and naïve. China has already proven its ability to instigate successful industrial change on a massive scale. The country has proven itself adept at aligning its vast financial resources with its ambitions, intentions and actions. Moreover, the collective commitment to football of both state and business differentiates China from the piecemeal approach witnessed in Russia. And the moves of Martinez (a recent Arsenal target) and Teixeira (heavily courted by Liverpool) show that China has rapidly become a realistic option for many players at the peak of their careers.

The target for Chinese football this season will be to maintain the success of its teams in the Asian Champions League. Prior to 2013, a Chinese club had never won the competition; since, Guangzhou Evergrande has won the trophy twice.

The winner of this competition qualifies for FIFA’s Club World Cup; last year, Guangzhou reached the semi-finals where the club lost to the competition’s eventual winners, Barcelona. China will want to do better this year, success being a measure of the nation’s football development.

Before we get to next December’s tournament though, expect more high profile player signings by Chinese clubs. Much of the recent transfer activity has been intended to sustain the Champions League contenders through the competition.

However, the Chinese are conspicuous consumers who seem to have fallen in love with breaking world records. Sometime over the next year, it is entirely feasible that one of the world’s biggest stars will move to China for the world’s largest ever transfer fee.

In the medium-term, the importance of the Club World Cup to the Chinese should not be underestimated; indeed this may explain why China’s Alibaba E-Auto recently signed an eight-year deal to sponsor the competition.

Moreover, the chances of securing the rights to host the competition and have one of its clubs win it, are arguably greater and more straightforward than hosting and winning the World Cup.

Longer-term though, winning the World Cup remains China’s big goal. While some people may perceive the country has become the latest home for football’s mercenaries, China itself sees these players as being central to raising the quality of its football and its players. An ongoing challenge, however, will be to translate club strength into international team success.

Building a sport, raising its quality and achieving success are not achieved easily, as China is about to find out. Whether or not China realises its footballing vision is likely to depend upon the length of Xi’s tenure. If he can endure, we may see the World Cup realistically being held in the country after 2030.

In which case, the question becomes: can China sustain its interest in the world’s favourite game for that long?

Professor Simon Chadwick is currently the ‘Class of 92’ Professor of Sports Enterprise at the University of Salford. Simon is the founding Editor of ‘Sport, Business and Management: An International Journal’, is a former Editor of the ‘International Journal of Sports Marketing and Sponsorship’ (he continues to serve as an editorial board member for several other sport journals), and has authored and published more than 600 articles, conference papers and books on sport. His academic research has appeared in journals including Sloan Management Review, the Journal of Advertising Research, Thunderbird International Business Review, Management Decision, Marketing Review and Sport Marketing Quarterly. Simon has co-edited the books ‘The Business of Sport Management’ and ‘The Marketing of Sport’ (both Financial Times Prentice Hall), ‘Managing Football: An International Perspective’ (Elsevier), ‘Sport Entrepreneurship: Theory and Practice’ (F.I.T.), and ‘International Cases in the Business of Sport’ (Routledge). Alongside his books, Chadwick has created a Sport Marketing talk series for Henry Stewart Publishing, is Editor of a Sport Marketing book series for Routledge (Taylor and Francis), and is a visiting academic at IESE and Instituto de Empresa in Spain; the University of Paris, France; the Russian International Olympic University in Sochi, and the University of Pretoria in South Africa.