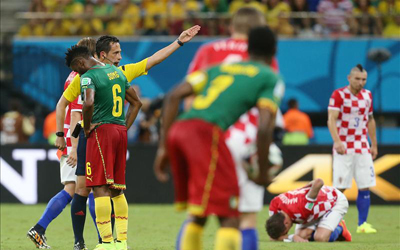 The Cameroon football federation (FECAFOOT) has said it will investigate claims that up to seven of the country’s players were involved in match-fixing at the 2014 World Cup in Brazil.

German news magazine Der Spiegel reported the allegation by a convicted match-fixer in Singapore and the ethics committee of FECAFOOT have confirmed they will look into the allegations against “seven bad apples” in their group.

Match-fixer Wilson Raj Perumal, who was detained by police in Finland in April, correctly predicted the score in Cameroon’s 4-0 defeat to Croatia and that a player would be sent off – Alex Song was red carded for striking Mario Mandzukic.

A statement from Cameroon’s FA read: “Recent allegations of fraud around Cameroon’s 2014 Fifa World Cup three preliminary games, especially Cameroon versus Croatia, as well of the ‘existence of seven bad apples [in our national team]’ do not reflect the values and principles promoted by our administration, in line with Fifa’s code of conduct and the ethics of our nation.

“We are strongly committed to employ all means necessary to resolve this disruptive matter in the shortest delays.”

FIFA would not comment on whether they would investigate as they did not want to “compromise any possible investigations.”

The news is the latest fallout from a disastrous World Cup for the Indomitable Lions, who lost all of their Group A games.