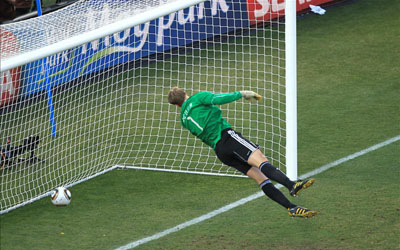 Cairos technologies AG, the parent company of IMPIRE AG, has confirmed they have joined the race to become the Goal-line Technology (GLT) provider of the FIFA World Cup in 2014 and 2013 Confederations Cup after being successfully licensed by soccer’s governing body, FIFA.

FIFA granted the German firm a license to become a provider and now Cairos have revealed they will look to take their license to the next stage.

A spokesperson for Cairos told iSportconnect exclusively: “Now that we are officially licensed we are also bidding to be the official goal line technology provider.”

The Cairos spokesperson also explained the benefits of the system.

“The system is 100% accurate – even if the ball is covered completely the Cairos GLT -System will decide correctly. The human input is restricted to simply switching the system components on. The Cairos GLT -System is independent of conditions, weather, time of day, sun light and shadow, wind, fog and snow – this makes it unique.

“The Cairos GLT -System has only a minimum impact to the stadium infrastructure. The cables are not visible. The standard goal frames can be used as well as the standard goal net. The goal line technology of Cairos can be installed in just a few days and is ready to use directly after the installation.”

“CAIROS/IMPIRE has a long time experience in servicing top level football teams & leagues. More than 1500 matches every year are being tracked, scouted, tagged and analyzed in real time.”

Cairos was also pleased that FIFA finally incoporated GLT for major events as it has previously been tested in past events.

“Of course we are very pleased the FIFA decided to implement a goal line technology at the World Cup since we are working on a system since 2000 and since our system was already in action at the Club World Cup 2007 in Japan.”

Cairos’ system was tested by the independent Swiss institute EMPA, and conducted its on pitch tests between 18-20 December 2012, firstly at Karlsruhe’s Wildparkstadion, and then at the club grounds of the regional side ATSC Mutschelbach, in Germany. After also successfully passing the laboratory tests, CAIROS then entered into discussions regarding the FIFA Quality Programme licence.

FIFA earlier this month announced they had opened the tender for the GLT to be used at the 2013 Confederations Cup and the 2014 World Cup and invited GoalRef and competitors Hawk-Eye to submit their tender.

GoalRef revealed to iSportconnect they would bid to be the provider and have a system in place for the transition to be smooth. Hawk-Eye have yet to comment.