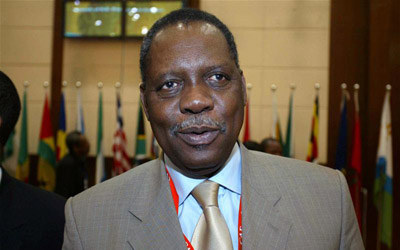 Issa Hayatou has insisted that to have allowed any postponement of the African Nations Cup finals would have been “to sign our death warrant.”

The Cameroonian president of the African football confederation (CAF) set out starkly the reasons for rejecting the delay proposal by initial host Morocco, vialis 40mg promoted by concerns about the spread of ebola.

The AFC executive committee decided yesterday in Cairo that the finals must go ahead, anabolics as scheduled, between January 17 and February 8.

Hayatou (pictured) said that the substitute host – or hosts, he did not rule out co-hosting – would be confirmed within “three to four days.”

Hayatou said that, in extended negotiations with the Moroccan federation, he had always insisted that postponement was impossible for the sake the ”credibility of the confederation.”

He also suggested that thought “they said the reason was ebola” this did not stand up on consideration that Morocco will be staging the FIFA Club World Cup next month – “only 25 days before the Africa Cup of Nations.”

Hayatou added: “This is an argument that must be quickly erased. This has led us to this decision.

“It was absolutely necessary to end this standoff . . . once you postpone this event, it will open the door for everybody to ask for a delay of any competition and we will no longer be credible and [appear CAF] cannot organise anything.

“We will hurt our sponsors and partners. Everyone will say we are not ready and finally it is CAF that will pay the piper. That is what I told the Moroccans: We cannot sign our death warrant because if we postpone this event, it will be very deadly for African football.

“Since 1957, never has an edition of the Africa Cup of Nations been cancelled or postponed, despite the geopolitical problems [Africa] has witnessed.”

A CAF statement said: “Applications [to host the tournament] are currently under review, and the executive committee will finalise the selection of the successful national association shortly and confirm the place and date of the draw of the final tournament at the same time.

“The executive committee confirms the continuation of qualifiers match-days five and six, which will be held during the month [14-15 November and 19 November], paving the way for the qualification of the 15 teams that will be joining the team of the host country.”

Explaining the demand for a postponement, Morocco’s Sports Ministry had said: “The decision is dictated by health reasons because of the serious threat of Ebola and the risk of its spreading.

“The decision was also motivated by humanitarian reasons since it is our responsibility to welcome all our guests and supporters in the best conditions in accordance with the culture and hospitality Moroccan traditions.”

Morocco had feared that travel to the finals by supporters from West Africa, the most affected area for ebola, would put their important tourist industry at risk.