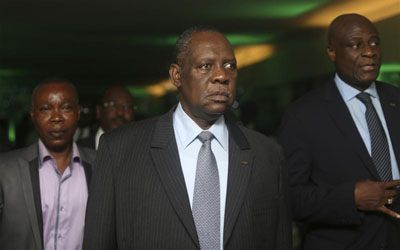 A meeting between the Moroccan Government and the Confederation of African Football (CAF) will be held today with an imminent decision expected on whether the 2015 African Cup of Nations (AFCON) will be postponed due to concerns of hosts Morocco over the Ebola epidemic.

A final meeting will take place this morning in the Moroccan capital Rabat, clinic with Hayatou expected to make the final decision and whether the tournament will go ahead as planned.

The 16-team tournament is scheduled to take place from January 17 – 8 February and the Moroccan Government has demanded the tournament be delayed until June over fears that fans from West Africa, the region worst affected by the Ebola virus, may travel to the nation.

Moroccan Government officials believe that if FIFA can consider switching the date for the 2022 World Cup in Qatar, then CAF should have no problems postponing the Nations Cup.

CAF are against the idea of postponing the date of the tournament and believe it will be impossible to return to the traditional January and February dates if the AFCON is moved to June.

An alternative option would be for CAF to find another host for the finals, but the search as yet hasn’t proved fruitful

South Africa are considered as the nation best equipped to take the finals on at such short notice, having hosted the 2010 World Cup, but the country has refused to consider helping Hayatou with the matter.

Algeria, Egypt and Sudan are other African countries who have refused to help, while Nigeria and Ghana are undecided but seem reluctant.

However, CAF face the risk of being sued by the Moroccan Government if they find an alternative host, over finances spent on upgrading stadia and support facilities.

This Moroccan stance was set out by Minister of Youth and Sports Mohamed Ouzzine.

Morocco are also due to stage the FIFA Club World Cup in December, but this will only feature six visiting teams and is unlikely to attract fans from other African nations.

“Morocco has a firm will to welcome the next edition of the Nations Cup,” said Ouzzine.

Ouzzine also confirmed that various alternative dates had been proposed in the hope that later in 2015, the Ebola crisis will have eased.

According to the World Health Organisation (WHO), the virus has claimed 5,000 lives, almost all in West African countries such as Liberia, Guinea and Sierra Leone.

“Our demand for a postponement is motivated by the latest WHO report, which contains alarming numbers regarding the extent and spread of the virus,” Ouzzine added.

“Morocco faces a historical responsibility as there has never been such a deadly Ebola epidemic.

“We expect around 300,000 fans for the Nations Cup and we are not equipped for the essential health checks.

“I cannot see any other countries being equipped for so many fans either.”