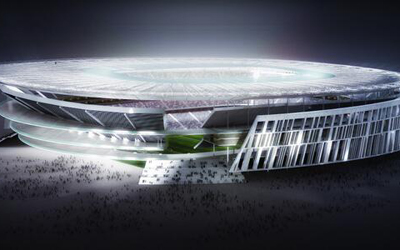 Serie A giants AS Roma have agreed a partnership with sports agency CAA Sports, medicine in a bid to maximise revenue for stadium naming rights.

The Giallorossi announced in March that they would spend €300m on building a new ground to replace Stadio Olimpico.

The club have today confirmed that the naming rights for the ground will be handled by the American agency.

“About two months ago, we took a major step forward by announcing our long-awaited plans to build a new stadium and a world class entertainment destination,” said AS Roma President James Pallotta. “Today’s announcement of our partnership with CAA Sports, the best in the business, is a significant step in bringing the plans and our vision to life.

“As we start conversations with potential corporate partners, our primary selling point is more than just aligning your company or brands with one of world’s most historic football clubs in AS Roma.  It’s about being one of the first stakeholders in a sports and entertainment complex unlike any in the world.  And it’s about having a meaningful presence in one of the greatest cities in the world.  CAA Sports will be central to telling our story and building our business to audiences and prospects worldwide.”

“We have enjoyed a longstanding friendship with Jim Pallotta and his management team, and are thrilled to partner on this incredible opportunity,” said Mike Levine, Co-Head, CAA Sports.  “The magnificence and incredible size and scope of this project with the new stadium, fan village, and retail district, as well as the on-field success and off-field popularity of AS Roma, makes this one of the most exciting projects we have ever seen.”

AS Roma have also confirmed today the opening of an official office in New York, giving the club a permanent home in the U.S. where it can grow its commercial operations.