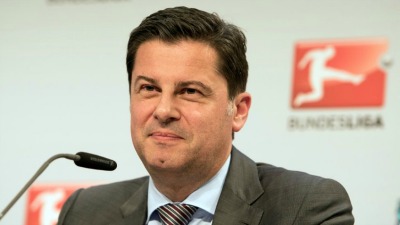 Despite Germany having four clubs in the latter stages of the Champions League, the same amount as England, Bundesliga boss Christian Seifert believes the German league is ten years behind the Premier League in its marketing.

The 2013 Champions League final was an all-German affair last May as Bayern Munich enjoyed a 2-1 victory over Borussia Dortmund at London’s Wembley.

This season, both Bundesliga sides have joined domestic rivals Schalke and Bayer Leverkusen in the competition’s last 16 but Seifert says while the Germans may be enjoying on-field success, their marketing is a decade behind that of their English rivals.

“I am convinced that the Bundesliga will benefit from sustained good performances in Europe, in terms of global marketing,” Seifert, CEO of the German Football League (DFL) told Hamburg daily Handelsblatt.

“But when you read that Puma have just pledged a three-figure deal in terms of millions, then that is food for thought.

“In terms of international marketing, the Bundesliga is ten years behind the Premier League.”

Seifert sees both developments as positive for the league.

“In my view, such a financial commitment can be quite meaningful,” he said.

“After all, the Bundesliga is economically and sportingly one of the strongest professional leagues in the world.”

But Seifert warns clubs to be wary of big-money deals from investors who could pull out overnight.

“During that period, an investor would have had some influence on the course of the competition, including de facto relegation and qualifications for international competitions,” he said.

“We owe it to the clubs, their fans and their business partners to look at these deals very closely.”