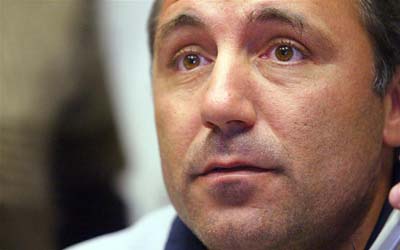 The most successful football team in Bulgaria, CSKA Sofia has declared itself bankrupt and will try to merge with another club to continue playing in the top flight next season.

If successful, the club will feature under a different name, but if they are unsuccessful they will have to start again in the amateur ranks.

CSKA Sofia have won their domestic league a record 31 times, the cup ten times and have featured in various European competitions 11 times.

However they have been struggling financially of late and were barred from the 2008-09 Champions League after failing to meet UEFA’s licensing criteria.

“CSKA that we know exists no more,” said Hristo Stoichkov (pictured), Bulgaria’s former European Footballer of the Year who was named coach of his former club earlier this month. “We’ll start afresh, without debts.”

“CSKA must now find another team with which to merge in order to use their licence and remain in Bulgaria’s first division.”

Speculation suggests they may merge with four-times champions Litex Lovech, but if they do not manage this by July 20, the start of the Bulgarian league, they will become amateurs.

The club confirmed they had transferred their 6.5 million shares to Stoichkov, who led his country to the 1994 World Cup semi-finals and is a well-loved figure in his homeland.

“After talks with Hristo Stoichkov, we took a common decision to transfer him all the club’s shares,” Dimitar Borisov, one of the club’s owners, said. “We, as owners have absolutely no financial claims.

“As responsible people, we decided that Hristo Stoichkov will take the decisions about the future of the club. We took these actions because of the grave financial situation of CSKA and our inability to support the club.”