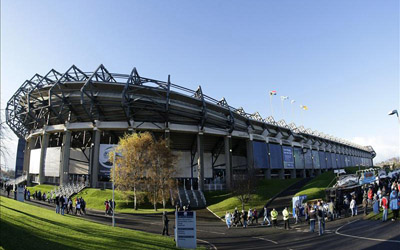 The deal will also include the British company becoming a sponsor of the Scotland 7s side from the outset of the 2014-15 HSBC Sevens World Series while also backing Scotland’s domestic league and cup competitions from next season.

“This is a momentous day for Scottish Rugby,” declared the union’s chief executive Mark Dodson. “We are very proud to bring BT back into our family of sponsors on a size and scale that is unprecedented both for Scottish Rugby and, we believe, Scottish sport.

“While the headlines may be dominated by the naming rights of the stadium, today’s announcement underlines BT’s alignment to our own values and goals, particularly that rugby clubs are the heart and soul of their communities that offer a welcome to all, young and old, boys and girls, men and women.

“This new funding underlines our desire to deliver more opportunities for young people to take up our game and broaden the reach of rugby across Scotland.”

Brendan Dick, director of BT Scotland, said: “BT is at the heart of Scotland providing communications for the nation and rolling out fibre broadband and we are delighted to be further extending our partnership with Scottish Rugby which sits at the heart of communities across Scotland.  The growth and scale of this partnership demonstrates our commitment to Scottish Rugby.

“BT will build on this partnership to expand its support for communities across Scotland, with the roll-out of high-speed fibre broadband making a real difference – particularly in rural areas; we’ll see sport and technology working hand-in-hand.”