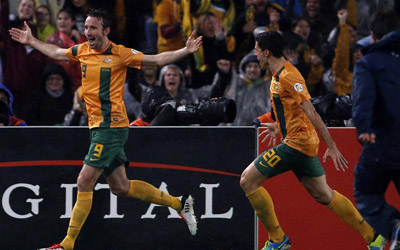 Fox Sports and SBS’ coverage of Australia’s vital World Cup qualifying win over Iraq was seen by an average audience of over 2 million viewers in Australia a record for the broadcast channels.

With a total audience peak at over 3 million viewers last night through the combination of the Fox Sports and SBS broadcast partnership with FFA, the match showed the popularity of football in Australia.

More than 549,000 viewers tuned in to see the Qantas Socceroos secure a dramatic 1-0 win over Iraq to book their passage to the 2014 FIFA World Cup in Brazil.

The match also became the third highest rating program on Fox Sports of all time.

The coverage numbers again grew with SBS recording their largest TV audience of the year.

SBS recorded an average national audience of 1.5 million (1.1 million metro and 406,000 regional) with a metro free-to-air audience share of 25 per cent.

“What these numbers show is that Australia has truly embraced football and the game has established its own place as a mainstream sport,” said FFA CEO David Gallop.

“The sold out crowd of 80,523 created an amazing atmosphere and the broadcast reached over three million viewers.

“What we witnessed was a courageous performance by the Socceroos against a determined Iraqi team. The players conducted themselves with pride and humility throughout the build up and deserve all the accolades for their historic achievement.”